The Martin G. McGuinn Ceremonial Courtroom is also an excellent venue for Villanova Law School's top notch Moot Court Board to rehearse for outside competitions and is used to host the Law School's annual Theodore L. Reimel Moot Court Competition. 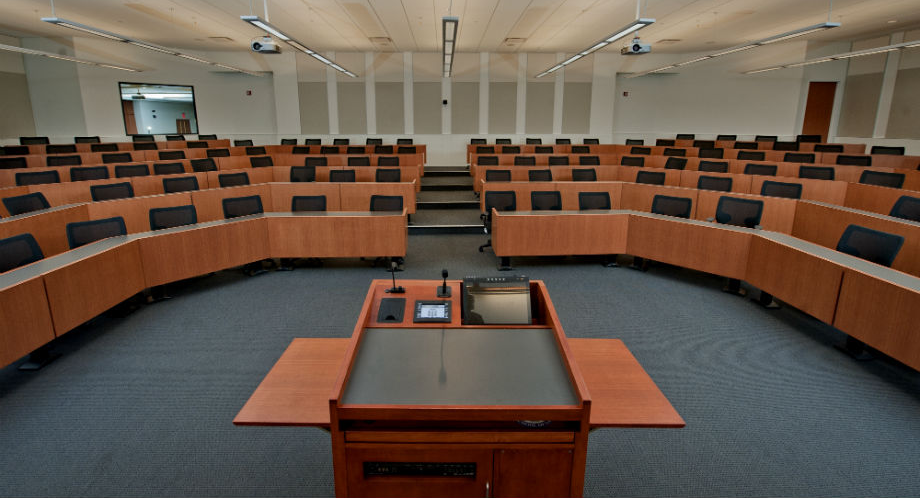 Features bench and ceiling microphones in addition to wireless and lapel microphones.  The audio captured can be recorded to create an instant court record.  The microphones also have echo cancellation technology.

Equipped with three video cameras installed in strategic locations that offer ideal video capture of different courtroom perspectives (judge, advocate, and jury).  The videos recorded by the cameras can be edited to create a complete and stylistic record.

Two projection screens handle the presentation of evidentiary displays.  Images are projected onto the screen by two video projectors attached to the ceiling.  These projectors are equipped to handle an array of inputs including computers, DVDs and document cameras.

Speakers are strategically placed throughout the Courtroom to optimize sound amplification without creating echoes for the audience.  The speakers also feature a "mix-minus" voice lift system that greatly reduces the possibility of feedback and allows for a consistent volume despite the inconsistency of speaker voices.

Equipped with infrared Assisted Listening System and corresponding portable receivers that provide assistance to those who are hard of hearing.  The infrared laser system does not interfere with systems in adjacent rooms.  This system meets the requirements of the Americans with Disabilities Act.

Touchpanel control stations are located at the lectern, the judge's bench and the AV control booth, and control all AV functions in room including the lighting, AV input, and recording.