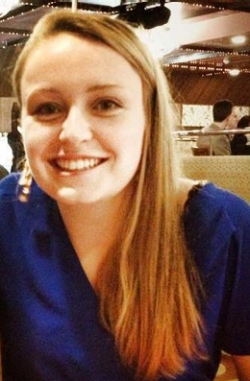 Elizabeth (EJ) Bennett '17 BSN, RN was the first student to develop an Innovative Evidence-Based Public Health Project through the Center for Global and Public Health.

EJ was motivated to address this critical public health issue because her mother, a nurse in Boston, befriended a young man who was struggling with a heroin addiction.

EJ describes, “After encountering many homeless people over the course of my mom’s nine years, working as a nurse in Boston, Dan stood out. Under the dishevelment, Danny’s young age, exceptional eye contact and handsome features sparked her interest. After handing him a bag with breakfast for a week on her commute into Boston last winter, she was stunned to see him, one day, in what she recognized as a heroin stupor – leaning against a pole in the Boston Common, eyes closed, legs bucking. The next day she approached him to offer further help. After learning that Dan’s struggle with addiction began after the sudden passing of his mother, my mother knew she had to act. Over time, we learned that Danny was a college graduate from an outstanding family with loving parents.

In response to Dan’s resistance to participate in traditional inpatient detox treatment, my mom began to consider the possibility of housing. Treatment seemed futile with the knowledge that upon completion, Dan would return to the street with no home. After three months of work to complete the necessary forms, Dan was selected to move into a non-profit housing organization.

Last summer, I met him for the first time. My mom theorized that by removing Danny from the grind of street life and reintroducing him to aspects of the life he once had, something might spark his motivation to recover.”

Dan became part of EJ’s family’s life and EJ wanted to highlight for practicing nurses the struggle and psychosocial needs of heroin addicts.

EJ’s final project can be found at: http://www1.villanova.edu/villanova/nursing/centers/globalhealth/publichealthprojects.html

Please feel free to share EJ’s work with nurses and others who may be interested in the care of an opioid addicted patients.