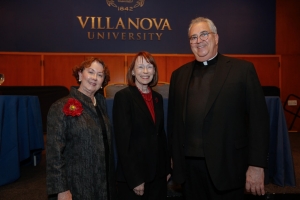 The Fitzpatrick Award for Transformative Leadership acknowledges and celebrates Dr. Grady’s relentless pursuit of advancement in health care through nursing science, igniting change in numerous interprofessional collaborations, galvanizing the next generation of leaders, and inspiring action in countless nurse scientists across the country and the globe. After remarking about Dr. Grady’s phenomenal impact on nursing science and health care, Dean Havens challenged the students, faculty, colleagues and fellow nurse scientists, “to be inspired by Dr. Grady and continue to ask those bold questions and innovate with new science to improve care and the systems in which care is delivered”. Immediately following the ceremony and award presentation, Dr. Grady delivered her lecture, “A Vision for the Future of Nursing Research”.

Dr. Grady is a transformative leader and her work has been immensely impactful. She was appointed director of the National Institutes for Nursing Research (NINR) in 1995. Under her 23 years of leadership, the Institute grew to become an integral component of the National Institute of Health’s mission. She helped initiate major NINR research programs, strengthened interdisciplinary collaborations and supported the development of infrastructure and research and training opportunities for new researchers. During her tenure, the NINR supported discoveries that have improved quality of life, helped diverse communities stay healthy through wellness strategies, and assisted patients with better self-management of chronic conditions and enhanced the care of those with advanced illness.

Prior to joining the NINR, Dr. Grady held several academic positions and served concurrently on the faculties of the University of Maryland School of Nursing and School of Medicine. She earned her undergraduate degree in nursing from Georgetown University, and pursued her graduate education at the University of Maryland, receiving a master’s degree from the School of Nursing and a doctorate in physiology from the School of Medicine. She is an editorial board member of several journals and is a member of scientific organizations, including the Institute of Medicine (now the National Academy of Medicine), Society of Neuroscience, and the American Neurological Association. Dr. Grady is also a fellow of the American Academy of Nursing and the American Stroke Association. She was named one of the top 100 Most Powerful Women in Washington, D.C., is a past recipient of the NIH Merit Award and received the Public Health Service Superior Service Award for her exceptional leadership.

The M. Louise Fitzpatrick Award for Transformative Leadership should be conferred upon a person who demonstrates transformative leadership that has brought about change in nursing, health and/or health care, a visionary perspective, a commitment to excellence; a concern for human dignity, ethics, service, diversity, underserved and vulnerable populations, and social justice, nationally and globally, that reflects the values and mission of Villanova University and the M. Louise Fitzpatrick College of Nursing.