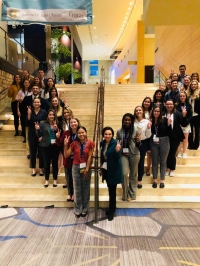 Dr. Carol Weingarten, the SNAP-Villanova advisor stands with the Villanovans who attended the SNAP Annual Convention in November. Several Villanovans were elected to the board, and many were honored for their outstanding service.

During the convention, students attended workshops and plenary sessions, participated in the state SNAP House of Delegates, elected the 2019-2020 student Board of Directors, networked with recruiters for externships and jobs, interacted with representatives from professional nursing organizations, learned about new products and publications related to nursing, and found inspiration for further graduate study through talking with nursing recruiters in the Exhibit Hall. Vathana Oukan, 2019 SNAP-Villanova President, was the student leader of the delegation. Following SNAP-Villanova’s elections at the start of 2020, she will remain on the Board as Past-President to mentor the new president and lead the delegation to the National Student Nurses Association Convention in Orlando.