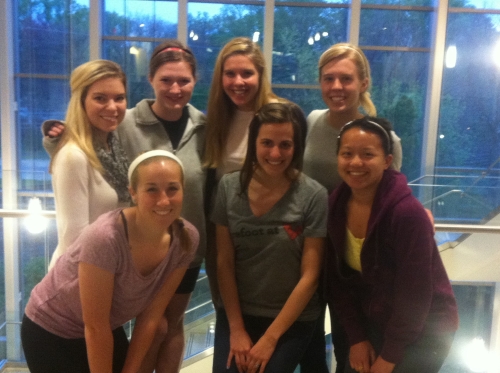 Nursing Without Borders has developed its constitution, selected officers and run health events for the community. Its officers include (front row, L-R): Maureen Lynch, chair of Advocacy; Kelsey Yasak, founder; and Jessica Lee, co-president and (back row, L-R) Karley McBreen, chair of Education; Nora Hammond, chair of International Projects; Erica Whitney, chair of Local Projects; and Elizabeth Fijal, co-president. Kelsey is a second degree student, and Jessica and Elizabeth are juniors, while the other students are sophomores. Not pictured, secretary/treasurer Aurora Vandewark, also a sophomore.

Volunteering is in Kelsey Yasak’s blood. Her mother, an avid volunteer, runs a homeless shelter site once a month through their church in Illinois with her father regularly cooking and serving food at the shelter. Kelsey has always been passionate about social justice. Although originally planning to attend medical school, it wasn’t until after she graduated from Villanova in 2011 as a French major with minors in peace & justice and theology, that she realized nursing was the better fit. For her, it was where she believed she could have the greatest impact with her interests deeply rooted in public health issues. Because she wanted to serve urban communities and has an intimate understanding of the university’s mission and dedication to the community, Kelsey decided to continue her studies here at the College to earn her bachelor of science in nursing degree.

Kelsey wanted to make a difference during her time at Villanova and utilize the numerous community connections the university had to offer. In brainstorming with Kim Connolly, MPH, BSN, RN, director for the Center for Global and Public Health and clinical assistant professor in the College of Nursing, she came up with the idea of creating a group called “Nursing Without Borders” (NWB). Inspired in part by her fiancé Robert Hanlon, the founding member of “Business Without Borders,” Kelsey envisioned a group that would focus on sustainable projects in the community and promote social justice. In accordance with student development guidelines, she created a constitution for her group and had a petition signed by 20 people, demonstrating the students’ interest in a group like NWB. Soon, the group was officially formed, with its focus on four pillars: local and international projects, education and advocacy. Kelsey believes it to be the only group of its kind based in a nursing school.

NWB focuses its attention on what the community sees as a need, with the goal of creating sustainable solutions for these populations. It is a service-related organization, which carefully examines social justice in healthcare. Kelsey believes that “Every person has the right to access, so we as providers have an obligation to see that through. In NWB, we see what the community needs, by asking and not just assessing.” The group examines issues from a more holistic point of view and attempts to go beyond weekly service opportunities.

As of May 2011, the group began to visit several communities and created numerous service projects including an NWB-designed foot clinic in the Kensington area of Philadelphia. Their goal is to visit four to five communities each semester. As the group expands its reach, other students in the University have been inspired. A new group, Liberal Arts Without Borders, was recently formed. It’s clear that Nursing Without Borders’ efforts in the community and desire to ignite change have given hope to others and have sparked the flame for others.