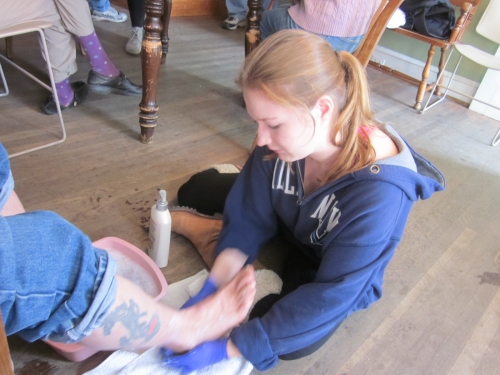 On February 17th, Villanova’s College of Nursing’s newest group Nursing Without Borders (NWB) visited the Catholic Workers Free Health Clinic in the Kensington area of Philadelphia. This underserved area is known for its prevalent homeless population. Aware of this disparity, the members of NWB created a “foot clinic” where they could help treat and educate this community on common foot problems, a major concern in the homeless population.

The Catholic Workers Free Health Clinic evaluates patients with a variety of health problems with the goal of meeting the need for periodic health care for individuals who are typically homeless, underinsured, or uninsured. In collaboration with alumna Mary Beth Appel ’81 BSN, MS, RN, CFNP and Johanna Berrigan, PA, the co-founders of the clinic, the team treated nearly 35 people who visited the clinic. NWB members who participated in this visit were founder and second degree student Kelsey Yasak ’12 and also second degree student Melanie Roxas ’12. Other members included junior Jessica Lee, co-president of NWB, and sophomores Erica Whitney and Norah Hammond. The group was accompanied by Kim Connolly, MPH, BSN, RN, director of the Center for Global and Public Health and clinical assistant professor in the College of Nursing, who has been a mentor to NWB since its inception this academic year.

Despite the small quarters in which they worked, a row home in this area, the team was able to efficiently access and treat these patients. The NWB team cleansed the patients’ feet and used creams, showing the patients how to properly moisturize their feet. Aware that foot care is a concern for this population, the team created and distributed educational materials to the clinic patients on common, preventable foot problems such as athlete’s foot. The handouts described the symptoms of these problems and how to treat them, along with pictures, so that the patients could recognize symptoms. Other handouts bulleted tips on basic foot care along with pictures of common problems and preventative strategies to further demonstrate proper care.

In addition to providing treatments and education, NWB set another goal for this visit: to provide the clinic patients with new or gently used shoes. Without adequate footwear, the treatments and preventative care these patients receive is ineffective. So, the team collected shoes through donations from family and friends. They were able to adequately fit each person in shoes, allowing the patients to pick out ones they liked best while still providing necessary support and comfort. The team also shared tips with the patients on how to keep their new shoes and feet dry during wet weather, another important issue for this population.

With such a positive reaction to their first effort and in response to a request by the Clinic’s co-founders, NWB followed up with a second foot clinic on April 27th where they also distributed much-needed flip flops for the community members. The foot clinic is just one of several initiatives NWB has designed to address inequalities and create sustainable projects in the community.