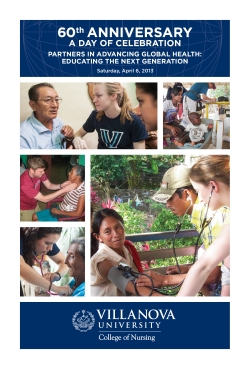 As today’s students prepare to depart for clinical experiences in Peru, South Africa and many other locations in the world, or lug backpacks into Driscoll Hall’s classrooms and clinical labs brimming with new technology, they follow in the footsteps of six decades of College of Nursing graduates who have “Ignited Change” in nursing. Nursing students were the first women to study full-time at Villanova University. Our Nursing students are eager to pursue lives marked by a passion to make the world a better place. Each of their stories enriches the College’s history as Nursing marked its 60th Anniversary with a Day of Celebration on April 6.

Ever since Villanova established a College of Nursing in 1953, administrators, faculty, students and staff have built upon that foundation to create a college that has evolved to meet the needs of an ever-changing health-care system and nursing profession. Throughout the College of Nursing’s history, the priority has been the education of nurses within the framework of Catholic beliefs and values and the heritage of the Order of St. Augustine. During the last half of its history, the College has initiated changes that significantly position the school and its graduates for future success. Students are encouraged to study abroad, thanks to the Connelly Foundation’s establishment of an endowment. With the 2008 opening of Driscoll Hall, they gained a home in an entirely new building, an expansive 75,500-square-foot environmentally friendly structure featuring an auditorium, lecture hall, clinical simulation labs and more. Like the bricks and mortar used to construct Driscoll Hall, the changes over the past 10 years have been the result of strategic planning designed to strengthen and sustain a college renowned for its academic excellence. The range of recent enhancements includes an increasingly globalized undergraduate curriculum, an accelerated program for college graduates in other disciplines, increased interprofessional and interdisciplinary activities, and two doctoral programs.

The last decade has been emblematic of the work undertaken by countless individuals, observes M. Louise Fitzpatrick, Ed.D., R.N., FAAN, Connelly Endowed Dean and Professor. She notes how the Connelly Foundation’s gift, announced in April 2003 during the College’s 50th Anniversary celebration, played a pivotal role in allowing the College to reach its current stage of development. It has provided support for student and faculty development, enhancement of technology and lab resources, and creation of the Connelly-Delouvrier International Scholars Program. This program enables students, under the supervision of Nursing faculty, to pursue a portion of their clinical coursework in other countries and in the United States with multicultural populations. Connelly- Delouvrier Scholars have had clinical practica in a nurse-managed birthing center on the Texas-Mexico border and community health experiences on Native American reservations. They have learned about health-care systems through electives in Ireland and Japan. Others have received clinical course experiences in Peru, Nicaragua, the Dominican Republic and South Africa, where they apply their knowledge and skills and provide culturally appropriate care to marginalized populations. Currently, Panama and Ghana present new opportunities for future experiences. The Connelly Endowment, scholarships endowed by friends of the College, the support for promoting the College through the media (provided by a University trustee) and Driscoll Hall are symbolic of the commitment of the University trustees and administration, our friends and alumni who support the ongoing development of the College and its students. Dean Fitzpatrick notes, “This generosity reflects an appreciation of what nursing contributes to society; to the academic environment; to scholarship designed to improve patient care; and to the value of the College, as an expression of Villanova’s mission.”

Although the College maintains a primary focus on health care in the United States and its ever-changing landscape, it encourages international students to contribute to our understanding of global health while they study and learn at Villanova. They enrich campus life with their experiences and diverse cultures. Twenty years ago, the first nursing students from the Sultanate of Oman arrived and began their M.S.N. studies at Villanova. These graduates are now leaders who have revolutionized and transformed their country’s health-care system.

“It’s been really great to watch nursing develop in Oman,” observes Ruth McDermott-Levy ’96 M.S.N., ’08 Ph.D., R.N., assistant professor of Nursing. “We’ve done such a great job that the nurses from Oman can now study for bachelor’s degrees in their country. They’re coming to Villanova and other universities for master’s and doctoral degrees.”

The College has definitely established itself and plays a crucial  role in nursing education locally, nationally and internationally. Evidence of its quality is validated by its designation as a Center of Excellence in Nursing Education. Development of new academic programs, centers and support from benefactors, alumni and the College’s Board of Consultors have been significant in its progress. The board was established in 2007 to serve in an advisory capacity to the dean. It provides an external perspective on matters that affect the nursing profession, the College and its strategic directions. It includes alumni, parents of students, health-care leaders and friends of the College.

In the decades to come, the College of Nursing will continue to further its 60-year history through increased scholarship and research while maintaining the quality of the programs and activities that have already been developed. The recent generous gift of an endowed faculty chair in the College from Diane L. and Robert F. Moritz, Jr., D.D.S., ’51 VSB is a major testimony to the support we receive from our friends and their confidence in the nursing profession. The use of this endowed chair for the advancement of research and scholarly inquiry in nursing will be a major catalyst in the next stage of our development. The success of the College of Nursing has resulted from the efforts of many groups. Villanova will continue to educate nurses who are ethical and intelligent leaders, expert practitioners, scholarly professionals and caring individuals who “Ignite Change.”

The creation of the Doctor of Philosophy in Nursing Program 10 years ago was another major milestone that had been part of the College’s long-term strategic plan. The College began this Ph.D. Program in part to respond to the nursing faculty shortage affecting universities across the country, says Nancy Sharts- Hopko, Ph.D., R.N., FAAN, director of the program. The Ph.D. Program has graduated 26 students, 24 of whom are now in nursing faculty roles. Among these graduates are several who have received prestigious grants and scholarships. In particular, the Jonas Center for Nursing Excellence and Independence Blue Cross have been our partners in assisting doctoral students with financial support.

As part of a national movement, advanced practice nurses can now study in Villanova’s Doctor of Nursing Practice Program (D.N.P.). The D.N.P. Program enables nurses with master’s degrees in advanced practice (nurse practitioners, clinical nurse specialists, nurse anesthetists and nurse midwives) to pursue additional study geared to participation in the development of innovative models of health-care delivery. The D.N.P. Program has the potential to play a crucial role in ensuring that clinical experts are prepared as leaders in health policy development and in projects that enhance the quality and safety of patient care. According to Debra Shearer, Ed.D., M.S.N., FNP-BC, director of the program, “Ultimately, the goal is to ensure that advanced practice nurses are knowledgeable about evidence-based practice, leadership and finance in order to become competent and effective leaders in their specialties.”

The College’s accelerated bachelor’s degree program for adults with earned degrees in other fields is also marking its 10th anniversary. When the current class graduates in July, more than 500 students, from across the country, will have completed this program. Maryanne V. Lieb ’85 M.S.N., R.N., coordinator of Second Degree Options, points out: “Accelerated programs have grown in popularity over the last 15 or 20 years. They invite into our profession a very special group of people.” She adds that students with previous degrees who come into the accelerated program “bring rich experiences and diversity to nursing.” Those who enter the second degree program often have “risked a lot,” including leaving secure jobs, to take on the intensive full-time study, Lieb emphasizes. The College strives to connect these adult students with peers and role models who can help them make this life transition as easily as possible.

During the last 10 years, two new academic centers were established in the College. They enhance its mission and interdisciplinary goals. The Center for Global and Public Health, established in 2010, extends the College’s engagement in international health and creates programs that address health-related factors important to the quality of life in various regions of the world and within diverse populations in the United States. The MacDonald Center for Obesity Prevention and Education opened in 2011 as a result of a gift from the MacDonald Family Foundation and Take Shape for Life Foundation. It serves as a locus for interdisciplinary collaboration in promoting health and nutrition through education and research that fosters development of healthy lifestyles.