Innovation inspiration at Forbes Under 30 Summit 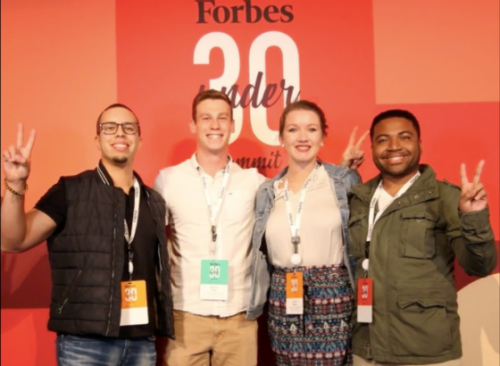 Be part of immersive experiences for the world’s  top community of young leaders and entrepreneurs?  “Yes,” said seniors Tony Garcia  and Lauren  Munter  who, as Forbes Under 30 Scholars,  attended the 5th Forbes Under 30 Summit  held September 30 to October 4 in Boston (they are seen above, far left and 3rd from left, with senior engineering  students Anthony Busa and Branden Garrett).

“I wanted the opportunity to explore new innovation and medical technology on the horizon, as well as the ability to network across different industries and assert myself as a woman and an investor/entrepreneur,” explains Lauren who has conducted research related to toddlers involved in unintentional shootings in the U.S. “I was also excited about the opportunity to have fun with other young entrepreneurs.”

The event convened a diverse group of more than 7,000 young leaders and entrepreneurs who could choose from among 24 different content tracks including healthcare, education, venture capital, politics and cybersecurity.

In an energetic and fun setting, the scholars networked in social situations.  Lauren notes “It was nice to have an atmosphere that was more casual than the typical networking event, and I think it benefitted most of the attendees.”

“I hoped to learn how to empower myself and other women in the administrative roles that we are finding ourselves in as time goes on. I believe that these goals were met, as not  only did I learn a lot about CRISPR and gene editing, as well as a new hand-held ultrasound that you can plug in and read using a smartphone, but also different tactics when it comes to owning your ‘seat at the table’ in a male-dominated work environment,” says Lauren.

Tony was driven to attend the event because of his self-described  “strong interest in public health, innovation, and social work”  during his time at Villanova. “These interests were heavily influenced by my participation since freshman year in the Team Latina research project headed by Dr. Linda Maldonado as well as my experience during the Villanova in the Valley program  last year,” says Tony.

A tough opportunity to pass up, he was anxious to attend as a college student “where curiosity and questions are encouraged in the pursuit of knowledge.” In the health care track, Tony says he  learned from individuals already making an impact in that sphere  while discovering the latest trends in public health. He listened to the story of two college students who started a company with an electronic health record software and data repository for cancer research that was recently acquired, as well as a start up with a new non-pharmacological intervention to combat postpartum hemorrhage. He notes, “Experiencing discussions from young leaders like these expanded my perspective of what it means to create positive change in health care.”

Tony summarizes, “I began this conference wondering what it takes to cause such broad impacts as the speakers I had seen at the Under 30 Summit. Throughout the conference I noticed in every speaker a sense of curiosity, a willingness to venture out of their comfort zone, and a burning persistence to carry out their vision of bettering society once they had identified a pressing issue, no matter how difficult it seemed. Nurses can learn from this by having the courage to challenge the status quo. And what better people to ignite change than nurses, who hear the sufferings of others and are able to notice issues on a societal level through the patients they interact with on a daily basis? I definitely left this conference with a more attentive perspective while interacting with patients in the future and ideas for creating change in the communities I serve both at and beyond the bedside.”