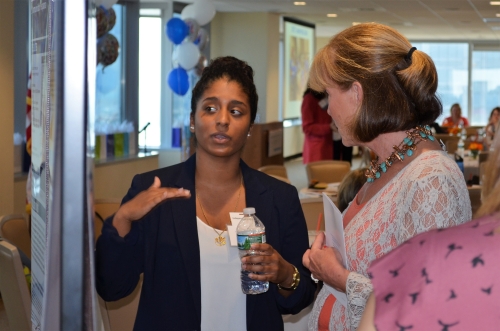 Senior Christal Ramharack spent the summer after junior year participating in the Independence Blue Cross (IBC) Foundation Nursing Internship Program. As part of her internship, the Jackson, N.J. native, was assigned to one of the IBC affiliated clinics where she was able to serve a population that would otherwise be overlooked. This population included those of lower socioeconomic status, immigrants new to the United States, and undocumented individuals and families. The internship also included several leadership labs in which she and the other interns met at IBC headquarters in Philadelphia to learn important skills revolving around networking techniques, being a young professional, and cultural competency.

Christal explains, “I chose this internship because I wanted to educate myself on an aspect of nursing that I was unfamiliar with: public health nursing. I hadn’t really given public health nursing a fair chance when learning about it in class, so I figured that the best way to learn was to submerge myself completely in it.” She had the perfect experience at ChesPenn Health Services Center (CPHS) for Family Health where she worked Monday through Friday, dividing her time between the Chester and Upper Darby locations.

The Center is a Federally Qualified Health Centers (FQHCs), meaning a “local, community- directed non-profit health center that serves low income, medically underserved communities. Located in areas where care is needed but scarce, FQHCs improve access to care for patients regardless of their insurance status or ability to pay,” according it its website.

Christal worked alongside a registered nurse providing primary care to newborns to older adults, including pregnant women. Her day involved taking vitals, triage, vaccinations, EKGs, prenatal exams, and much more. Throughout the summer, Christal was also asked to conduct a research project addressing an important issue at her site. She later presented a poster on the subject—Pediatric vaccination adherence in the lower socioeconomic status population at CPHS—to the IBC group and invited guests at a capstone event.

“I got a ‘behind the scenes’ look at what goes on when patients are uninsured, and the role that social determinants of health plays in that lack of insurance,” Christal notes, valuing the skills and experiences she gained as an IBC summer intern that will inform her practice. She hopes to launch her career on a labor and delivery unit and eventually go back to school to get her master's degree.