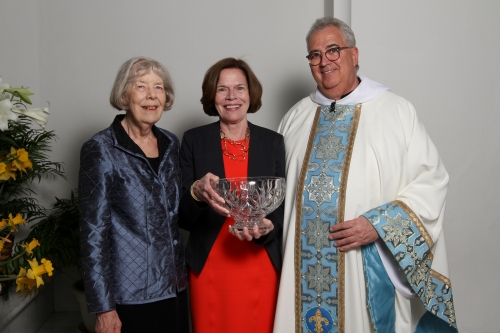 Mary Duffin Naylor ’71 BSN, PhD, RN, FAAN is the inaugural recipient of the  M. Louise Fitzpatrick Award for Transformative Leadership, so recognized by the Villanova University M. Louise Fitzpatrick College of Nursing during an extraordinary year for the College, recently named for its late dean. She received the award on April 7 during the College’s 29th Annual Mass in the St. Thomas of Villanova Church on the University campus. Dr. Naylor, a fellow in the American Academy of Nursing, is the Marian S. Ware Professor in Gerontology, Director of the NewCourtland Center for Transitions and Health at the University of Pennsylvania School of Nursing, as well as a trustee of Villanova University.

The architect of the Transitional Care Model -- an advanced practice nurse-coordinated, team-based innovation targeting high risk older adults-- Dr. Naylor, along with the multidisciplinary team she has led since 1990, has tackled the challenges associated with testing multidimensional interventions for these vulnerable elders and their family caregivers. She is relentless in her pursuit of improving care for them.

Most health care systems in the U.S. and across the globe are not designed to address the complex health and social needs of the growing population of chronically ill older adults.  Large gaps in care are the norm, resulting in tremendous and often avoidable human and economic burdens, such as frequent hospitalizations and poor health outcomes. In that environment, Dr. Naylor has done the unimaginable. She pioneered the design, evaluation and diffusion of health care innovations that have significantly improved the outcomes for chronically ill older adults while reducing health care costs. Importantly, her research has consistently demonstrated the unique contributions of nurses in addressing the challenging needs of this complex population and those of their family caregivers.

Dr. Naylor - who holds a bachelor of science in nursing degree from Villanova University and her master’s and PhD from the University of Pennsylvania –  leads a rigorous and sustained program of research. Findings from three multi-site, National Institute of Health-funded randomized clinical trials consistently demonstrated the effectiveness of the Transitional Care Model, through improvements in patient’s health and quality of life while reducing health care costs. She then expanded the focus of the care model to hospitalized older adults with cognitive impairment and their caregivers, as well as tested the model in the primary care setting with a nurse-physician team approach to addressing the needs and goals of at risk community-dwelling older adults.

The Coalition for Evidence-Based Policy has recognized this model as a “top-tiered” evidence-based approach that, if scaled, would have a positive impact on the health and well-being of chronically ill older adults across the U.S., while assuring wiser use of societal resources.

In the face of barriers to its adoption, Dr. Naylor is a trail blazer in translating the Transitional Care Model into “real world” settings to have a more immediate, positive impact on the care and outcomes of chronically ill people. She has partnered with leaders of health systems, payers and other stakeholders to create a model for continuous, evidence driven, performance improvement. Hundreds of health care systems and communities throughout the U.S. have adopted the model to redesign their care systems. Dr. Naylor and her team also are working with health systems throughout the globe.

Dr. Naylor has taken advantage of multiple opportunities to use evidence to inform health care policies, including accepting positions on policy making groups such as the Medicare Payment Advisory Commission, authoring policy briefs and testifying before U.S. Congressional Committees. Today, the use of evidence-based transitional care is included in multiple policies designed to foster health delivery and payment reforms.

Always the educator, Dr. Naylor has inspired and mentored numerous doctoral and post-doctoral students who have further translated the Transitional Care Model to improve the lives of multiple patient populations. Her work will live on for generations.

The M. Louise Fitzpatrick Award for Transformative Leadership is named in memory of M. Louise Fitzpatrick, EdD, RN, FAAN, Connelly Endowed Dean and Professor of Nursing, who led Villanova University’s College of Nursing from 1978 until her death in 2017. The annual award, presented to a person whose transformative leadership—through high standards of excellence and extraordinary vision, creativity and inspiration—has ignited dramatic change resulting in the significant improvement of nursing, health or health care. Special preference is given to those with global impact and a spirit of intellectual inquiry, consistent with Villanova’s Augustinian values and whose endeavors and leadership benefit vulnerable and underserved populations.