A Senior Driven to Serve 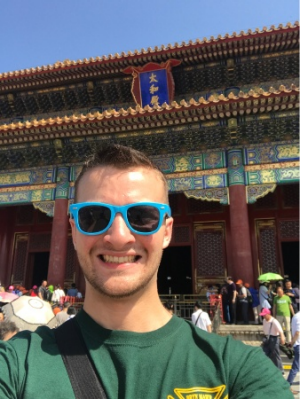 Corey Snow, a senior nursing student, has found his niche at Villanova. Originally, Corey’s mother encouraged him to consider Villanova University’s College of Nursing after a close family friend graduated with her BSN in 2013. Upon visiting Villanova for the first time, he knew instantly that Villanova was where he wanted to be. And, after doing a bit more research, Corey felt Villanova produced “excellent nurses” and that the University would give him the edge he needed to excel in his field.

Growing up, the Boston native always had an interest in health and medicine, and volunteered in the NICU at Brigham & Women’s Hospital where he was exposed to an array of professional tracks ranging from physician and pharmacist to physician’s assistant and nurse. Corey eventually decided to pursue nursing knowing that “being a nurse meant caring for patients and their families on a holistic level and I wanted to be the one who was making a positive difference”.

Corey, a member of the Dean’s List, and a Connelly-Delouvrier Scholar, is a highly motivated student, seeking every opportunity that presents itself as chance to learn and grow. An active member of the Villanova University community, he is involved in the Villanova Chapter of the Student Nurses’ Association of Pennsylvania, the Music & Instruments Club and is a member of the Merion Fire Company in Ardmore, Pa. Over the course of the last year, Corey took night and weekend classes and recently graduated from the Montgomery County Fire Academy with the International Fire Service Training Association’s Firefighter 1 certification.

In May of 2017, Corey’s horizons expanded beyond his expectations. After receiving a scholarship from the Connelly Foundation, he participated in a field study in international nursing in China. Over the course of the trip, Corey was not only able to immerse himself in Chinese culture and visit ancient sites, but also participated in hands-on workshops with Chinese nursing students from Peking University and Peking Union Medical College. He engaged in thought provoking discussions and lectures where he was able to discuss “how professionals from the Chinese and American health care disciplines could revolutionize our systems by working together to construct better, more efficient and fair health care for all. “My experience allowed me to gain a great deal of detailed cultural insight, which in turn allowed me to grow as a person.”

The summer of 2017 led Corey to an externship in the Emergency Department at Cooper University Hospital in Camden, NJ. Here, he gained invaluable skills and knowledge pertaining to critical care, pharmacology and “working as part of an interdisciplinary team” while gaining deeper experience with patient-family communication. The fast-paced intensity of being a firefighter, combined with his externship at Cooper University Hospital has challenged Corey to make and execute critical decisions and has inspired him to pursue a career in Emergency, Trauma or Intensive Care Unit nursing.

Down the road this dedicated and motivated Villanovan hopes to return to the Boston area. Until then, Corey plans to “stay in the area”, grow as a nurse and someday return to school to become a nurse anesthetist.