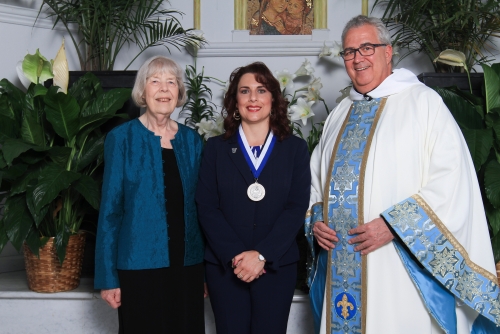 The achievements of Michele “Micki” Ballister ’08 MSN, ’13 DNP, CRNA were celebrated on April 29 during the College of Nursing’s 28th Annual Mass and Alumni Awards Ceremony, held in the St. Thomas of Villanova Church.

Lesley Perry, PhD, RN, associate dean, bestowed the College’s highest award, the Medallion, to her for Medallion for Excellence in Nursing Education. She is Assistant Professor, Division of Anesthesia for Nurses, Medical University of South Carolina, Charleston.

Dr. Michele Ballister, better known to us as "Micki,” exemplifies leadership as an advanced practice nurse. She's a nurse anesthetist and educator of nurse anesthesia students at the Medical University of South Carolina where she has earned the respect and admiration of her colleagues and students.

Micki is a champion of patient safety and quality care in the field of anesthesia. This is of particular importance and the competence and confidence of the nurse anesthetist is critical to successful patient outcomes.

Micki, spelled “M-I-C-K-I,” began her nursing education at the University of Scranton, earning her bachelor’s degree in nursing in 1997. As a US Army Nurse she was promoted to the rank of Captain and then began her journey with us, at Villanova.

In 2008, she was awarded her master’s degree in nurse anesthesia from Villanova, and returned to study for the degree of Doctor of Nursing Practice, which was awarded by Villanova in 2013.

Her scholarly project for the DNP combined her expertise in practice with her preparation as an educator of nurse anesthetists. Her study, "Student Registered Nurse Anesthetists: The Impact of Structured High Fidelity Simulation on Anesthesia Ready Times," gained considerable attention by the American Association of Nurse Anesthetists at whose annual conference she was acknowledged. She was then invited to join the faculty at the Medical University of South Carolina to enhance simulation in the anesthesia curriculum. At the university, she was voted the best clinical instructor by the students and received the Excellence in Clinical Instruction award by the University.

Micki is a clinician, educator and energetic leader. She is a committed professional whose work and concern for at risk patients reflects concern for patient safety and the competence of an expert. Her performance reflects her values which were fostered by the Augustinian and Jesuit education.

The College of Nursing is delighted to award its 2017 Medallion for Excellence in nursing education to Dr. Michele Ballister.