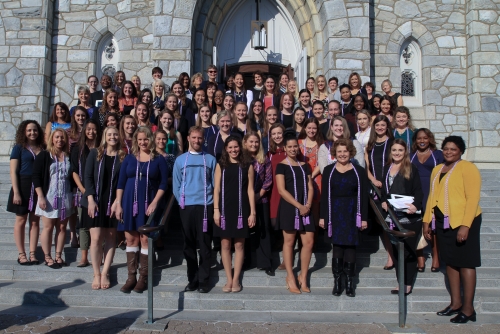 Eight years in the making, the Alpha Nu Chapter of Sigma Theta Tau International (STTI)-nursing’s honor society-culminated in 1966 with the chartering of the chapter on May 15 at a dinner in the East Lounge of Dougherty Hall.

“But Sigma Theta Tau International, while appreciating our past, stands for preparing for our future,” noted keynote speaker Nancy Sharts-Hopko, PhD, RN, FAAN, professor and director of the PhD in Nursing program at Alpha Nu’s annual induction ceremony and 50th Anniversary Celebration on October 30, 2016.

That future lies with the 125 undergraduate nursing students, 15 graduate students and four nurse leaders from the community who were inducted into Alpha Nu, in the presence of four charter members of the chapter who returned to campus for the event: Marguerite (Margie) Aromando ’65 BSN, Margaret (Peg) Griffiths ’62 BSN, Barbara Park Drake ’66 BSN and Eileen Walter Ferdinandsen ’65 BSN.

In recognition of its milestone, the Chapter also made a donation to the College of Nursing Building Enhancement Fund and presented M. Louise Fitzpatrick, EdD, RN, FAAN, Connelly Endowed Dean and Professor, with a replica of what will appear on a paver on the patio outside Driscoll Hall. 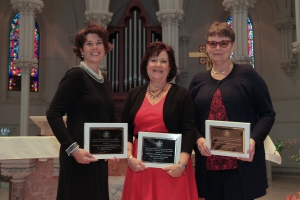 During her keynote address, “Alpha Nu at 50: Celebrating our History,” Dr. Sharts-Hopko described what she found after immersing herself in the chapter archives, noted in the following excerpts from her speech:

The aims for establishing the organization included:

-Creating an incentive for student achievement

-Distinguishing Nursing among other divisions of the University; and

The application for charter and all duplicate copies were handwritten. The next dean, Dean Marian Schrum approved the charter on May 18, 1962. At that time there were 154 students in the school, including 53 RNs and 154 BSN students.

The final application was submitted to Sigma Theta Tau on February 27, 1965 with Marian Schrum still as Dean and Fr. John Klekotka as President of the University, and included lists of students, alumni and faculty who were interested in membership. Mary Ann Rooney was the student President of the Preliminary Committee, and Mrs. Mary Alice Holland was the Faculty Advisor.

The national meeting at which our charter as the 35th chapter was approved took place in Washington DC in October 1965.

Finally the big day came, 8 years after Sr. Alma initiated the process. The chartering on occurred on May 15, 1966 at 5:30 p.m. at a dinner in the East Lounge of Dougherty Hall. The address was provided by co-founder of the school, Sr. Margarella, in which she explicated the sociologist Vilfried Pareto’s concept of “elites,” and she argued for the case of elites in nursing.

What does all of this mean to you, our inductees? As I said, I hope you realize that you join a chain of people who extend across the generations; our successes today come because of the hard work and success of people such as those I have described to you.

...My afternoon in the archive was a delicious experience that filled me with gratitude for the efforts of numerous Sigma Theta Tau, Villanova University, and Alpha Nu leaders who were committed to birthing this organization and building this College.  The values that they were committed to celebrating – love, courage, honor - have endured, and will guide us into the future if we maintain focus.”

“The values that (the Alpha Nu founders)   were committed to celebrating – love, courage, honor - have endured, and will guide us into the future if we maintain focus.” –Dr. Nancy Sharts-Hopko, keynote speaker, in her address Alpha Nu at 50: Celebrating our History.

About the charter members

The four charter member of Alpha Nu who attended the October 30, 2016 Induction were acknowledged during the ceremony and presented with a gift in recognition of their leadership and service to nursing.

·         Marguerite (Margie) Aromando ’65 BSN - Throughout her career, Margie worked in medical-surgical nursing, as a visiting nurse, in her husband Warren’s dental practice and as a school nurse.

·         Margaret Griffiths ’62 BSN – Peg served as a Navy nurse right after graduation, and later taught at the University of Pennsylvania and at Thomas Jefferson University where she is professor emeritus. She retired from Penn in 2014 as an assistant dean.

·         Barbara Park Drake ’66 BSN - Barbara loved every aspect of her career in nursing from ICU nurse, to head nurse of ICU-CCU to teaching in the classroom, and as a School Nurse where she practiced for 25 years. In her Junior year in nursing she was asked to participate on the preliminary committee to establish the Alpha Nu chapter and served as the committee secretary.