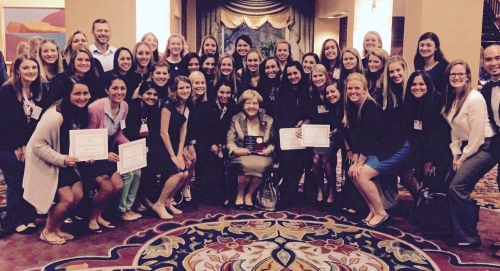 Cheers and a spontaneous standing ovation followed the presentation of the state Student Nurses’ Association’s Lifetime Achievement Award to M. Louise Fitzpatrick, EdD, RN, FAAN, Villanova University’s Connelly Endowed Professor and Dean of the College of Nursing on November 19, 2015 at the state SNAP convention in Harrisburg.  The annual convention was attended by over 650 students, faculty advisors and staff and included 41 Villanovans.  Speaking without notes to a packed banquet hall, Dean Fitzpatrick evidenced her legendary ability to connect with her audience.  She spoke of her own student days in the student nurses’ association, leadership and the importance of involvement in SNAP and the National Student Nurses Association (NSNA) on careers and health care.  Rarely has an audience anywhere listened so closely to a speaker.  Before and after her presentation, Dean Fitzpatrick chose to be seated with the group closest to her heart, Villanova’s delegation of nursing students.

The Lifetime Achievement Award from SNAP originates with Dean Fitzpatrick and will not be an annual award, as few people have such extraordinary, sustained impact on nursing students.  The award dates to a discussion during the 2015 state Board meeting when Dean Fitzpatrick’s name was mentioned.   “Leader,” “visionary,”  “expert educator” and “advocate for nursing education” were among the accolades describing her.

According to 2015 SNAP state President Meghan Long, "Dean Fitzpatrick is an inspiration to all members of the student nurses association, not only for her successes in the profession, but for her powerful dedication to student nurses. We felt, as the SNAP State Board, that it was vital Dean Fitzpatrick was recognized. This led to the creation of our first ever, Lifetime Achievement Award. Only someone who has had tremendous impact on the student nurses association and was a true leader in the nursing profession could receive this award. The board unanimously decided that Dean Fitzpatrick should be our first recipient and receive SNAP's highest honor."

Dean Fitzpatrick is also considered the founder of SNAP-Villanova.  As the youngest dean of nursing in the United States and the only woman dean at Villanova, Dean Fitzpatrick arrived at Villanova in 1978 with a vision of excellence that included the establishment of a chapter of the Student Nurses Association as a co-curricular association essential for development of students and future nurses.  When the chapter formed, Dean Fitzpatrick herself attended the NSNA’s convention in Detroit with a freshman student whom she introduced to the workings of an association, the NSNA and ways nursing students and nurses could be involved across their careers.  That student, Sandra Myers (now Gomberg) ’85 BSN, ’90 MSN, became chapter and state President, recruited SNAP-Villanova’s current advisor, and graduated to become one of the nursing profession’s outstanding nurse executives and leaders.

Across the years, Dean Fitzpatrick has continued to foster students’ involvement in SNAP-Villanova, SNAP and the NSNA and her generosity extends beyond Villanova University.  Always humble, she credits others with the many individual and group accomplishments earned through the student nurses’ associations.  With the SNAP Lifetime Achievement Award, Pennsylvania was able to recognize Dean Fitzpatrick and her unparalleled contributions.