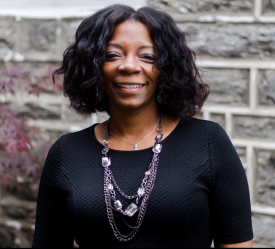 “We need a more proactive approach to preventing falls in the aging population,” says Michelle A. Cuttino, MSN, CRNP, AGPCNP-BC, a student in the DNP Program at Villanova University College of Nursing. “Current literature shows that mild cognitive impairment (MCI) is an established falls risk,” she notes, adding, “There is currently no practice standard for screening for MCI in the long term care setting; moreover, the United States Preventative Task Force makes no recommendation for MCI screening in primary care.” She is advocating for Using the Montreal Cognitive Assessment (MoCA) tool to improve the identification of residents who are at risk for falls in the long term care (LTC) setting, the focus of her doctoral capstone project. The MoCA tool is used to screen for mild cognitive impairment (MCI).

Cuttino is an adult-gerontology nurse practitioner with Optum Care, and passionate about her work with the geriatric population. With a goal of managing chronic illness and mitigating hospitalizations in her patients, she cares for a total of 116 residents in two rehabilitation and long term care facilities in Philadelphia.

“Falls in long term care are prevalent, and fall related injuries are the leading cause of death in adults age 65 and older,” explains Cuttino, “They are also a significant contributor to the cost of healthcare, as seniors who fall are five times more likely to be hospitalized than their younger counterparts.”

Nurse practitioners and physicians can be fooled. “Mild cognitive impairment is a pre-cursor to dementia and the symptoms are very subtle and not easily identified by providers and health care personnel. It is the etiology of MCI - progressive decline in executive function - that directly contributes to the risk of falls,” says Cuttino.

Safety demands early detection of MCI but this is a challenge. Why? “Unlike dementia, people with MCI are able to negotiate the instrumental activities of daily living such as driving, working or banking. Most people who develop MCI are never identified until their symptoms become more prominent, prompting further objective exploration,” notes Cuttino. She hopes to change the routine of providers and have an impact on the quality of care for seniors, explaining, “Because of the lack of screening practice, we are failing to identify residents who may have an established falls risk when they are admitted to the facility. Although we cannot prevent all falls, routine MCI screening creates a window of opportunity for effective intervention that we would not have otherwise.”

Cuttino will present her scholarly DNP project at the National Nurse Practitioner Symposium this July in Keystone, Colorado.

For more information on the online DNP program, please visit www.villanova.edu/nursing/dnp . Completed applications will be accepted until April 1, 2016.

According to the Centers for Disease Control and Prevention (CDC, 2013) LTC facilities report 200 falls annually, on average, and more than 700,000 older adults are hospitalized due to fall related injuries - usually a hip fracture or head injury.  These injuries are among the 20 most expensive medical conditions with the average hospital cost of $35,000. In 2013 the direct medical care costs for falls totaled $34 billion, and that number will likely increase due to the aging population.

Centers for Disease Control and Prevention. (2015). Home and Recreational Safety. Retrieved from: http://www.cdc.gov/homeandrecreationalsafety/falls/