Rescue: how innovation and persistence are saving trauma patients’ lives

“Do we have access!?” It’s a common question in emergency situations. Gaining intravenous or other access to the patient to quickly infuse fluids, medications or other life-saving products is critical for success in resuscitation situations. 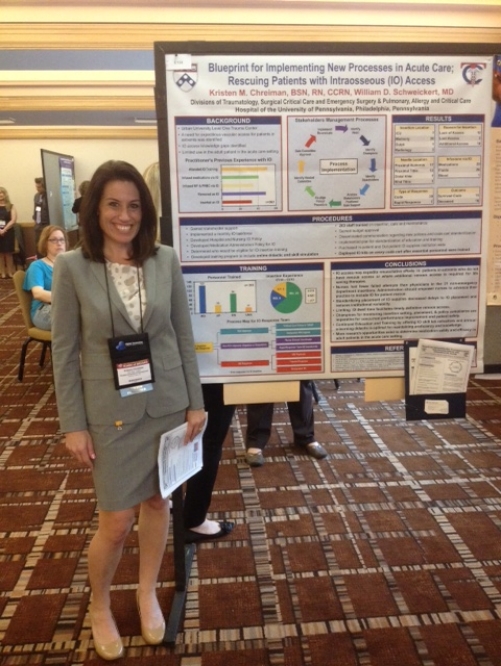 Use of intraosseous (IO) access in resuscitation of patients during emergencies is a viable option not always utilized due to its availability and gap in education for its proper insertion. Kristen Chreiman ’15 MSN, RN, CCRN, the Trauma Program and Network Clinical Coordinator at Philadelphia’s Penn Presbyterian Medical Center (PPMC), took a vested interest in the devices and their implementation after she noted a greater need for IO access to expedite resuscitation of trauma patients in her facility. While studying for her master of science in nursing degree in healthcare administration which she earned in May, Chreiman turned her observations into a successful research study regarding increased use of IO access in patient resuscitation.

“We began to see an increased utility for IO access to expedite resuscitation of the trauma patient in extremis who arrived to the hospital from the scene by police.  These patients typically suffered penetrating injuries and had lost pulses en route or barely had signs of life on presentation to the bay.  We began to place the IO device in the humeral site to deliver blood products or fluids until a central line or peripheral IV could be established.  I developed an interest in this device and thought it would be a great topic for my research class,” Chreiman recalls.

With the support of her advisor, Associate Professor Patricia Haynor, PhD, RN, NHA who has since retired this summer, Chreiman’s research journey began with a review of the current literature to propose her own research question and study design. She quickly found that her facility did not have a policy on the use of IO devices, and if she were to advocate for its increased use on the nursing units and the Emergency Department, there would have to be an educational piece involved as well. Using an interdisciplinary approach, Chreiman gained support of physicians and navigated through the process of IO policy implementation for both the hospital and nursing department. In 15 months’ time, Chreiman was able to develop both policies, gain pharmacy approval of a medication policy, board approval of the policies, get IO kits purchased through budget approval, develop an online program and sim lab for education and device training for 263 staff members, and place IO kits on nearly 100 code carts throughout the hospital. 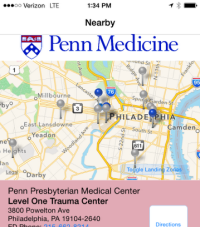 A sample screen shot from the app developed by then-MSN student Kristen Chreiman and colleagues.

In addition to her research, Chreiman was also involved in the development of an iOS and Android app for pre-hospital first responders that provides tools that aid in the saving of lives. The app offers information regarding the nearest hospitals and trauma centers, phone numbers to Emergency Departments of those hospitals, and nearest landing zones for aeromedical support. Chreiman felt the timing was perfect since Penn Medicine’s level one trauma center was being relocated to PPMC. “I was taking a marketing class with Dr. Haynor and put together the concept of what the app could offer and built on from there.  I met with marketing team at PPMC and took it to the informatics and new technologies committee at Penn for approval and then researched a developer,” says Chreiman.  “I got marketing to fund it and recruited the new trauma liaison who was a flight medic to help me with the content. The team (Chreiman, marketing and the trauma liaison) started it in August and it was rolled out in February.” She notes that in the first few weeks there were over 1,000 downloads with positive reviews. She plans to expand the functionality soon.

In March, Chreiman attended the Society of Trauma Nurses 18th Annual Conference in Jacksonville, Fla. where she presented a poster describing her implementation process for expediting rescue of adult patients in the acute care setting with the use of intraosseous access. Her manuscript has been published in the September/October 2015 issue of the Journal of Trauma Nursing. When asked about her work on these projects Chreiman stated, “This has been a perfect alignment of education and professional events. I could not have done this without Dr. Haynor and the education I received at Villanova University.”