Transformational service: shifting from a military to health care career 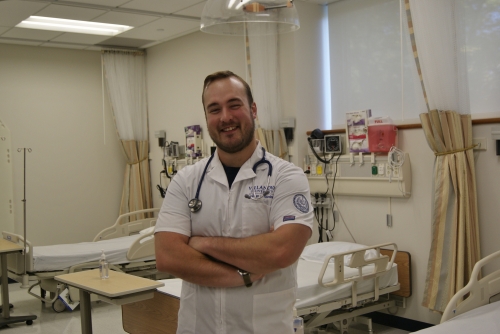 For high school student Kyle Chelius, the September 11th terrorist attacks were a game changer. Before his senior year, the Reading, Pa. native enlisted in the Army. Six days after graduation in 2003, he was in basic training.  His memory of that? “You run everywhere. You run to go run,” notes Kyle with humor and quiet humility when reflecting on his service. He is now a nursing student in the accelerated second degree BSN program.

After basic, he raised his hand for Army Jump School at Fort Benning, Ga. to become a paratrooper. Kyle says, “Jumping’s easy. They have to teach you the landing.” Following the three week intensive course which included night jump and full combat load jump experience, this new private first class was assigned to Fort Bragg, NC and the legendary 82nd Airborne Division, an infantry division of the Army that specializes in parachute landing operations. Kyle’s time at Fort Bragg was “mundane” for the first two and a half years, filled mainly with training exercises.  Things changed with deployment. 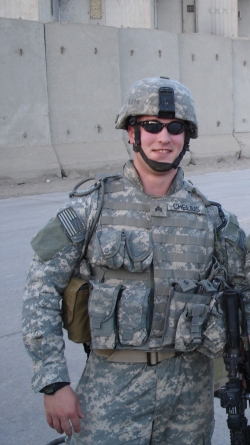 Sgt. Chelius in Baghdad, during his second deployment to Iraq in 2007.

In May of 2006, Kyle was deployed to Northern Iraq for 6 months in support of a larger Special Operations mission to capture top leaders of the insurgency operating in the region. This involved numerous assault operations that had to be meticulously executed. “Everything had to be carefully planned, like a ballet,” he explains. It was not without risk. Kyle recalls in “the first hour of the first day of the first mission, there was one soldier killed and one wounded.”  Not every day was like that day; while “10% was ‘white knuckle,’” much of the time was spent waiting, according to Kyle.

He was not kept waiting for very long. Kyle returned home to Fort Bragg around Thanksgiving of that year. He was sent overseas again in early January, as part of a troop surge, to northeast Baghdad, outside Sadr City. His unit- the 325th Airborne Infantry Regiment- was charged with targeting the criminal elements responsible for the sectarian killings that had been ravaging the country and jeopardizing the stability of its fledging government. As a young sergeant, he assisted in operations and raids that resulted in the capture of stockpiles of enemy weapons, explosives and currency. Kyle says it can be difficult for a veteran who served in Iraq to reconcile that time with events of today in terms of cost and benefit. “I hope we did some good,” he says thoughtfully, “We did do good locally, offering protection, food and water.”

Kyle remembers the weight of his role, “I think back to the responsibility I had as a 21 year old kid. I can’t think of another profession besides healthcare where people have that responsibility. It’s staggering.” Kyle’s military experiences transcend that profession. He notes the parallels between his previous career and his new one as “the steepness of the learning curve and the severity of the consequences” (resulting from error).

While serving overseas, Kyle saw medics caring for the wounded. Initially he considered becoming a special operations medic, but then thought he would revert to an early dream of being a physician. He dove into science, earning a BS in Biology from Shippensburg University in 2013. However, a friend who is a nurse anesthetist helped inspire him to look into nursing. That decision was cemented when Kyle shadowed a nurse at a local hospital. Today, he enjoys his nursing courses and clinical practica. He “loves learning” about the body and disease processes. He noticed from day one in the hospital how nurses worked with one another—not unlike a military outfit—in order to reach a common goal, in this case providing the best possible care for a given patient.

As an adult coming into the profession, Kyle feels that more real work experience and more maturity helps a student be successful.  His military background has been helpful. He understands “leadership, teamwork, delegation and attention to detail—that’s big.” He was thankful to already understand the language of a hand off and explains, “a battle plan is the same as a care plan. You know what your plan is for the patient. Never go into a situation without knowing what your objective is. Know how to react to contact.”

In July of 2015, Kyle can add the Villanova Nursing Alumni pin to his airborne wings, ribbons and medals.  His uniform will be different but the service no less critical. He hopes to continue working within a fast-paced, ever-changing environment such as that found in critical or emergency care.

Sgt. Chelius, just before separating from the Army in April of 2008.