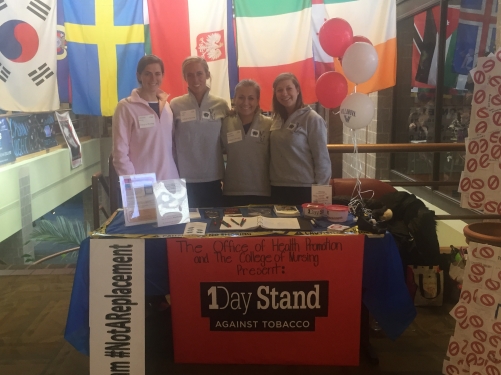 Seniors (left to right) Lindsey Berg, Taylor Noll, Angela Furbush and Madeline Mascola staffed a table for 1Day Stand on March 18 in Connelly Center. They, along with classmates in their health promotion practicum, organized the anti-tobacco event with the Office of Health Promotion.

1Day Stand is part of the U.S. Department of Health and Human Services' (HHS) Tobacco-Free College Campus Initiative (TFCCI) "to promote and support the adoption and implementation of tobacco-free policies at universities, colleges, and other institutions of higher learning across the United States." The TFCCI website states that "Tobacco use is the leading cause of premature and preventable death, responsible for 480,000 deaths a year in the United States....The 2012 Surgeon General's Report shows that 99% of smokers begin smoking and using other forms of tobacco by age 26, making college and university campuses a critical target for tobacco use prevention and cessation efforts."

The goal of the recent event was for all Villanovans - students and employees - to take a one day stand against tobacco, with hopes of taking a permanent stand.  Throughout the day, tables in Bartley Hall, Connelly Center, and Falvey Memorial Library had information about tobacco cessation and available resources.

Activities at the tables included opportunities to sign pledges to take a 1Day Stand, to participate in a tobacco free Villanova University petition, to learn fast facts, and to enter in several raffles.  The students considered the event a success, as over 300 signatures in support of a tobacco free campus were collected and much information was shared. They, along with the Office of Health Promotion,  thank everyone for their participation in the 1Day Stand and continued support to make Villanova a tobacco free campus.