Sidia Rose receives 2015 Medallion for Outstanding Service to the Community 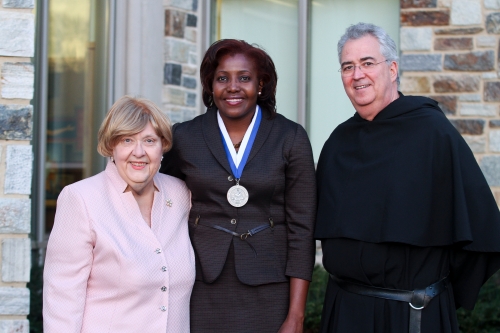 Sidia Rose received the 2015 Medallion for Outstanding Service to the Community. The following is her citation.

On September 28, 2014, Thomas Eric Duncan presented to Texas Health Presbyterian Hospital in Dallas with symptoms highly suspicious of Ebola and 48 hours later became the first person diagnosed with the deadly virus on U.S. soil. That same night, Sidia Elaine Rose was starting her scheduled shift in the hospital’s Emergency Department, and had been assigned to care for Duncan. She quickly realized that she had a choice to make. No one was forcing her to care for this patient, and doing so was a huge risk to her own health. Instead of backing down or giving into fear, Sidia donned protective gear, paying close attention to every protocol detail to prevent spreading the virus to her coworkers or any other patient being treated in the emergency department. She spent that night providing high quality nursing care to her critically ill patient.

In an interview on CBS’ 60 Minutes in October 2014 concerning her experience caring for Mr. Duncan, Sidia expressed her rationale for accepting her assignment. When asked why she did not exercise her option to refuse her assignment that night and instead agreed to risk her life caring for Duncan, Sidia explained, “As a nurse, I understand the risk that I take every day I come to work, and he's no different than any other patient that I've provided care for. So, I wasn't going to say, ‘No, I'm not going to care for him.’ As frightened as I was, I didn't allow fear to paralyze me. I got myself together. I did what I needed to get myself prepared mentally, emotionally, and physically, and I went in there and did what I was supposed to.”

Sidia’s philosophy of care and her selfless commitment to her patients despite risk to herself reflects the mission of Villanova University and the College of Nursing and the courage of nurses on the battlefield and at home to confront risk and danger in the care of patients. We are proud that Sidia is an alumna of her College of Nursing, BSN class of 2008. For her dedication in the face of adversity, the College of Nursing is pleased to award its Medallion for Outstanding Service to the Community to Sidia Elaine Rose.