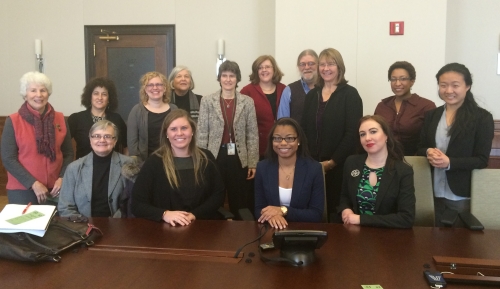 Nursing students visited Washington, D.C. to advocate for a healthy environment. At the EPA, they met with Janet McCabe from Office of Air and Radiation (back row, middle, in gray blazer with badge). Three of the students are seated in the front: Makenzie Lannon, Brittany Wyatt, and Elena Moran, with Jessica Mengistab in the 2nd row, second from the right.

At the start of this new year, four Nursing students- Makenzie Lannon, Brittany Wyatt, Elena Moran, and Jessica Mengistab -participated in a retreat of the Alliance of Nurses for Healthy Environments (ANHE) as part of ANHE's Young Nursing Leaders initiative.  AHNE has been working with the Environmental Protection Agency (EPA) on environmental issues that affect human health.

As part of AHNE's work relating to environmental health advocacy, the students joined environmental health nursing leaders from across the country to attend a meeting at the EPA in Washington, D.C. All four students were enrolled in Associate Professor Dr. Ruth McDermott-Levy’s Imperatives of Global and Public Health course, and were eager to take advantage of the opportunity. During their visit to the nation’s capital, the students met with staffers from the offices of Senator Pat Toomey (Pa.) and Senator Corey Booker (NJ), and spoke with Janet McCabe, the Acting Deputy Director for the Office of Air and Radiation. 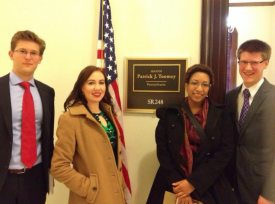 These meetings were arranged with the support of Alliance of Nurses for Healthy Environments (ANHE), a network of nurses from around the world focused on bringing attention to the direct link between environment and health. During the meeting with Janet McCabe, Jessica stated, “I think I can speak on behalf of my fellow students and say that negative impacts of climate change have been present in all of our clinical rotations regardless of nursing specialty or hospital location.” Jessica went on to explain that as the earth’s atmosphere heats up due to increasing amounts of greenhouse gases, the poor air quality can lead to a longer allergy season, which can worsen or exacerbate medical conditions such as asthma. The captured atmospheric heat can also lead to more frequent and extreme weather events, which allows disease-carrying vectors to thrive, contributing to Lyme’s Disease and malaria.

While in D.C., Makenzie, Brittany, Elena, and Jessica also had the opportunity to meet with other nursing students and nurses who were part of the Young Nursing Leaders Initiative. During this meeting on Capitol Hill, the students learned about the nation’s failed chemical policies and manufacturing of products with chemicals hazardous to human health.  The office of Senator Boxer became their ally by pushing for reform of our nation’s chemical policies. Brittany, who is interested in pursuing a career in a Neonatal Intensive Care Unit, learned, “There are known toxic chemicals within intravenous tubing used to give sick newborns their lifesaving fluids. There can also be toxic flame-retardant chemicals infused in hospital’s mattresses and curtains, and even found in knitted infant caps. We need to take a closer look and apply scientific evidence as we choose products in hospitals, because sometimes the risks are greater than the benefits, especially for vulnerable patients like premature babies.”

As a result of this retreat, the students felt empowered to speak to their fellow students, their patients, and their communities on the topic of climate change and its consequences on health.  They voiced career goals of “greening” of hospitals, and becoming a part of or initiating a “green team” in their future places of employment. While reflecting on her experience, Elena concluded, “Nurses have always been leaders in providing healing and safe environments for people. Nurses protect their patients and their communities and advocate for environments in which people can not only survive, but thrive.”