No such thing as retirement

Jean Carr is on the move, caring for patients at home and abroad 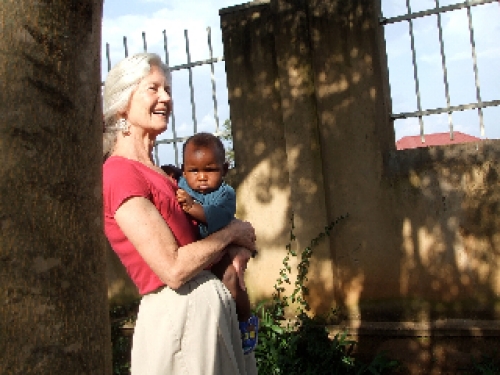 Jean Carr ’90 BSN, RN is in a small village in Rwanda where children affected or infected by HIV gather for support, some teaching, games, and music. Holding this little boy helped his older sister to participate more in the program.

“My theory is that although the nurse may be out of the market place, you never take the vocation out of the nurse!” explains Jean Carr ’90 BSN, RN. She is a nurse in motion, who, when arriving at Villanova, already had a wealth of life and job experience. She was 50 years old and a mother of three, with previous education as an LPN from Presbyterian Hospital in l978 and a BA in Sociology from Stanford in l960. Today, officially “retired” but continuing to serve the community, she is just as busy as ever.

In her career, Jean has been dedicated to caring for geriatric and hospice patients, as well as people infected with HIV. She has given herself to her patients but been inspired by them as well. She recalled her first job in 1978 at Inglis House in Philadelphia, noting that the patients with whom she worked gave her more insight into compassion, courage, and grace, which became the foundation for her ability to care for her husband who passed away at a young age.

After her husband’s death, Jean moved to Ludlow, Vt. and continued to work in long term care, primarily at the Gill Home, where she still spends time as a volunteer. Jean cared for her mother in her own home for the last five years of her life and became a hospice nurse for the remainder of her nursing career. She notes, “Sometimes I think I should have an SN after my name, as I have always seen myself as a sociological nurse, seeing the whole family as the unit of care and not just the identified patient.” 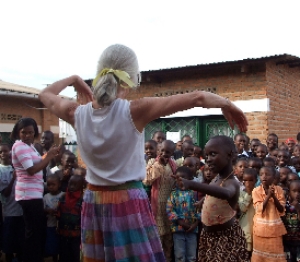 Jean Carr ’90 BSN, RN is seen at a different gathering but one similar in focus to the one in the above photo. She was teaching the children a song, "God Danced the Day You Were Born."

Jean has been living in Vermont for the past 24 years and has had the opportunity to become involved in global health missions throughout her career. After her Villanova graduation,  Jean spent six months in Tanzania, working with her son and his wife who were living and teaching there. During this time, she became deeply aware of the HIV pandemic and met a nun who was educating and supporting women in the area.  Upon her return to the US, Jean discovered that there was a significant need here at home and began to work with the Twin States Women's Network. Over the past 20 years, Jean has had the privilege to volunteer --with women and children who carry the virus or have progressed to having AIDS-- at the bedside, at retreats, and at summer camps. Some of the little ones she knew by the campfire are now teenagers, taking their medications faithfully and living productive lives.

Jean also discovered that a woman in a nearby town had started an organization called CHABHA (Children Affected by HIV/AIDS). They became fast friends, sharing a love for Africa and concern over the global HIV pandemic. The two traveled to Rwanda together and upon their return, Jean was able to gather friends together to support a particular village in Nyamata, Rwanda.

Jean says retirement “gives you more time to do the things you love, but at your own speed. I hope I will always be involved with the elderly, hospice, and folks living with HIV.  They enlarge life for me every day! People like Louise Fitzpatrick and Nancy Sharts-Hopko have also been a constant source of inspiration, and I am thrilled with the direction the nursing school has taken to be more involved globally.”  She notes that “Hospice and CHABHA continue to be very important in my daily life.”

If you are interested in learning more about the organization that supports children affected by HIV/AIDS here in the US, visit www.chabha.org