Through the eyes of the homeless

Senior Dan McWilliams learns firsthand about homelessness and health, and finds a career path along the way. 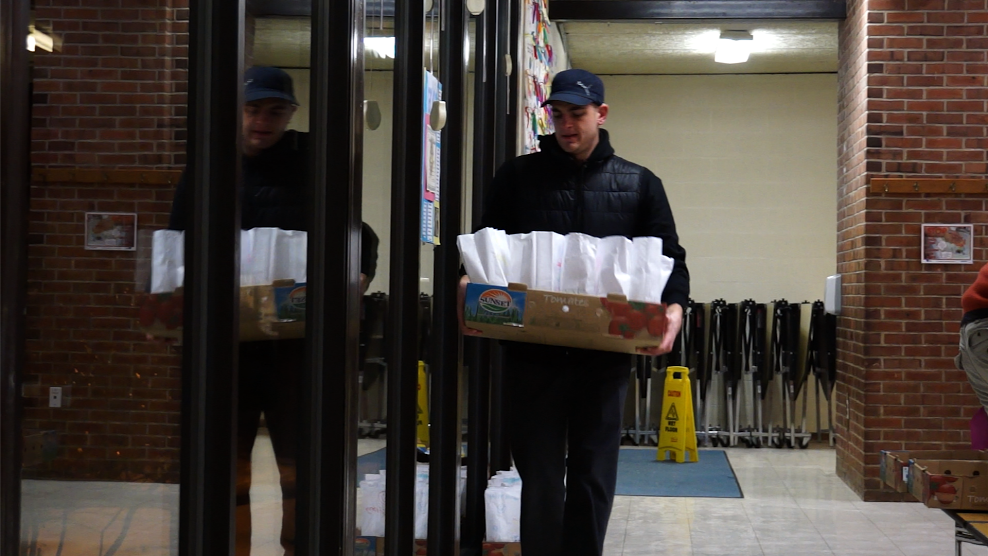 Dan McWilliams carries boxed lunches for the men at the shelter made by a local boy scout group last Christmas.

Senior nursing student Dan McWilliams, who had volunteered in high school during clothing and food drives, began his work at Student Run Emergency Housing Unit of Philadelphia (SREHUP) “through the eyes of an 18 year old kid” who had seen some poverty growing up in Delaware County but nothing at the level of the poverty seen in nearby Philadelphia.

SREHUP –profiled in Villanova’s social justice documentary All of Us Home with Dan’s father Steve McWilliams as one of the producers - is a completely student run shelter program, started by Villanova University, for men in the Philadelphia area.  Volunteers consist of students from Temple, Penn, Drexel and Swarthmore Universities.  SREHUP had three locations in Philadelphia, but is currently operating through one location on Broad Street, at the Arch Street Methodist Church, located next to City Hall.  SREHUP opens its door through the coldest months of November through April to a maximum of 30 men referred by Project Home. They must meet the three criteria necessary to stay at the shelter—the men must have non-violent offenses, be capable of living amongst others, and have transportation to the shelter.  Student volunteers pick up food cooked by people as far away as Coatesville, Pa. and deliver it to the shelter to a weekly large, family-style dinner. The students and the guests then have a chance to bond as they eat together.  Breakfast is also served to guests who spend the night.  The shelter is closed at 7:00 am after breakfast.

Dan, currently in his pediatric clinical rotation in the nursing program, has been an avid volunteer for SREHUP in his freshman year at Villanova when a friend invited him to the shelter.  He began his volunteer work as a shift leader two days a week during his freshman and sophomore year, became president during his junior year, and reverted to his regular volunteer role in senior year to focus on his studies.

He recalls meeting one of the guests the first night, “Big Steve,” with whom he had an immediate connection during an overnight stay at the shelter.  He remembers playing scrabble until 2:30 in the morning, and this man soon became a regular in his life, even accompanying him to certain classes, such as ACS and philosophy.  That relationship, plus his desire to help people, kept Dan coming back.

Dan notes that the relationship between volunteering at the shelter and his nursing education evolved as his classes became more nursing-oriented.  His time at the shelter has allowed him to experience individuals living with chronic physical and mental illnesses, and how difficult it can be to maintain and educate that population on their illnesses; there are people who are homeless who will take steps to manage their health and some will not.  Volunteering at SREHUP helped Dan acquire experience he wouldn't otherwise gain in the classroom. The opportunity has also taught him that there is hope out there. He sees the struggle that the guests face in trying to better themselves, to find jobs, and generate an income.  The SREHUP experience has “changed his life” and gives him perspective.  Dan’s interest in working with the underserved won’t end after graduation. As he starts his career in nursing, Dan plans to practice in public health and work with those who are homeless.

The SREHUP space when unoccupied.