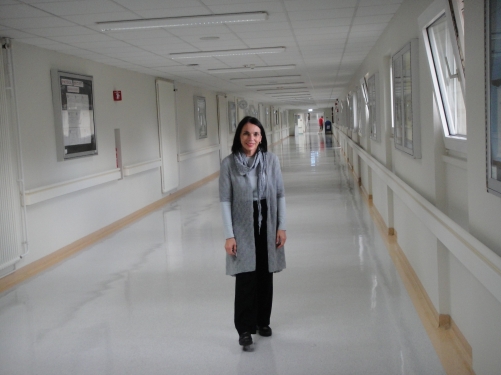 Dr. Carol Weingarten in a hallway at Landstuhl Regional Medical Center (LRMC) in Germany in 2011 while serving as a volunteer on a wounded Warriors Project trip. She was at LRMC in June 2014 when her Delta Gamma award was bestowed.

Associate Professor Carol Weingarten, PhD, RN, ANEF was nominated by Villanova’s Delta Gamma fraternity for the 2014 National Delta Gamma Faculty Award and was selected as the recipient from a pool of candidates. It is the first time Villanova's chapter and the region have had a national award. According to its website, Delta Gamma’s membership has grown to more than 142,000 women worldwide with 147 collegiate chapters and more than 250 alumnae groups across the United States and Canada.

Dr. Weingarten, a longtime advisor to Villanova’s chapter of the Student Nurses’ Association of Pennsylvania (SNAP) who has been lauded for her contributions to student development, the organization and profession, was honored during a special presentation at the national Delta Gamma convention in Phoenix at the end of June. Dr. Weingarten accepted the award via a pre-recorded speech since she and her husband were in Landstuhl, Germany doing volunteer work for the Wounded Warriors project at the time of the event. The campus chapter will be doing a presentation at Villanova in the fall.