"How can I be helpful today?": Comments on commitment and happiness from a senior nursing student 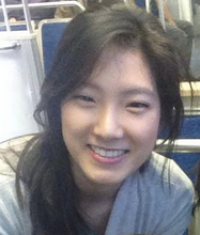 The following are remarks written by senior nursing student Caroline Park of East Brunswick, N.J. to her fellow graduates of the class of 2014.

An individual whom I admire asked me the following thought-provoking question, “Do you wake up in the morning thinking ‘how can I be happy today?’ or ‘how can I be helpful?’” Four years ago, I would have been quick to choose the former because my ultimate goal was to achieve happiness. It may seem like such a simple concept now, but I struggled to find my way there. However, I stand here today to share what I have uncovered about happiness during my experiences at Villanova University.

Back in 2012, when I was only a sophomore, my ethics professor assigned us a reading on John Stuart Mill’s view of happiness. Mill believed that there are higher and lower forms of happiness. According to Mill, the superior forms of pleasures are achieved through noble, virtuous acts that benefit society. On the contrary, the inferior forms of pleasures are the materialistic kinds that bring self-gratification. Many times, we are unable to pursue the higher forms of happiness because we desire that instant gratification of the lower forms. I agreed with Mill’s theory because his arguments were rational and aligned with my Christian views, but did I really believe it?

No, I ignored every bit of Mill’s wisdom. Instead, I subconsciously strived for the lower forms of happiness, such as a high GPA, an internship, popularity, a love life, and so on... Disappointingly, these pleasures were transient, so I endlessly chased other pleasures. As a result, I spent more time dwelling on what I lacked than what I was blessed with and I was stuck in a vicious cycle.

It was after a Villanova nursing experience in the Dominican Republic that my views underwent a drastic transformation. No, I was not at an extravagant resort but rather a shockingly impoverished town in the sugarcane fields. I had an incredible opportunity to use my nursing skills to give care to the Haitian immigrants living in this poverty stricken world. The more we interacted, the more our hearts became intertwined. I started to grow intolerant of the social injustices that they battled. I was frustrated at their lack of access to the most basic health care that we, here, take for granted. The most striking memory was perhaps when a woman came in to the clinic with an infected wound. It was an unforgettable experience that taught us the gravity of diseases and illnesses that millions of people face. Masking our surprise with forced composure, my peers and I knelt down on the dirty floor and tended to her wound. At the back of my mind, however, I was disturbed by the idea that this perhaps was the full extent of her treatment. I knew that once our team left, her wound would be uncared for. This specific situation and many others that followed awakened me to the realization that I had been too selfish to see that this world has more significant problems. Once I realized that I was undeservingly blessed, I made it my commitment to share my blessings with the underprivileged.

Now, every morning, I wake up and remind myself “I want to be helpful today”. Overall, this change in attitude has brought me greater and unconditional happiness, which may be what Mill had referred to.

Having committed myself to helping others, I noticed the magnitude of need in this world and started to grow overwhelmed. I, however, found hope in my fellow Villanovans. During the times of reflection with my friends, I saw great compassion and tenderness in their tears. I heard insight in their voices, and I felt the urgency in their hearts. I imagined that if we all come together with our various talents and build a partnership, there is an immense possibility to ignite change.

As we transition into a world that may challenge our efforts, we might find it helpful to reflect on this quote from the author, Barbara Kingsolver. “The arc of history is longer than human vision. It bends. We abolished slavery, we granted universal suffrage. We have done hard things before. And every time it took a terrible fight between people who could not imagine changing the rules, and those who said, 'We already did. We have made the world new.' The hardest part will be to convince ourselves of the possibilities, and hang on."

I want to thank Villanova University for equipping me with intellectual, spiritual, emotional, and cultural competence to make a difference in the world. I end my years here with bigger dreams than what I had ever envisioned, and I hope you all do too. Congratulations Class of 2014.