Blazing a trail for health 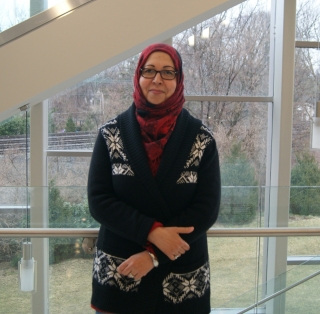 College of Nursing doctoral student Raja Jadelhack, ’02 MSN, RN knows what it is to be a pioneer.

One of just six nursing school graduates at the King Abdulaziz University in Jeddah, Saudi Arabia, Jadelhack’s hometown, in 1986, Jadelhack went on to oversee an overhaul of much of the country’s nursing education, as well as the perception of nursing, in the Middle Eastern country. Thanks in part to her guidance, there are now more than 70 students graduating annually from her alma mater, nursing programs have expanded throughout Saudi Arabia and nursing is no longer stigmatized as a career solely for individuals from lower-income backgrounds.

“Being a nurse had been seen as low-class, but that’s changing,” said Jadelhack, who is studying patient satisfaction in Jeddah - a major city of more than three million people situated on the banks of the Red Sea - for her dissertation. “When I graduated, parents didn’t want their daughters to be nurses. Most nurses were from lower socio-economic backgrounds. Now you can find nurses from very wealthy families.”

After graduating from King Abdulaziz's five-year nursing program - which she was inspired to pursue after establishing positive relationships with the nurses who took care of her when she was hospitalized for a surgery as a teenager - Jadelhack went on to become the Director of Nursing Education in the Maternity and Children's Hospital in Jeddah.

After being the Director of Nursing Education for about 10 years, Jadelhack moved with her husband, Nabeel, and three children - Waleed, 25; Haneen, 22; and Ahmed, 19 - to the United States for her husband’s work - and she soon found herself at Villanova University. “I immediately liked Villanova when I interviewed here,” Jadelhack said. “I felt it was like my home as soon as I came here.”

Upon receiving her Master’s in Nursing Education at Villanova, she moved back to Saudi Arabia with her family and became the director of nursing administration and director of nursing education at the Maternity and Children's Hospital in Jeddah. After working in that position for three years, Jadelhack was promoted to being the regional director of nursing in the Jeddah region of the Directorate of Health. For three years, she supervised about 5,000 nurses in 12 hospitals in Jeddah and the surrounding area. During that time, she built an administration and focused on policy and regulation work.

“Jeddah was the first place to really do policy work,” Jadelhack noted of the city where she grew up with her seven sisters and two brothers.

It was her work as regional director that set her on the path to her dissertation for her PhD, which she began at Villanova in 2010. Throughout her time in the Master’s and PhD program, Jadelhack said she has felt incredible support from the faculty and staff, including Nancy Sharts-Hopko, PhD, RN, FAAN, College of Nursing professor and director of the PhD program and Connelly Endowed Dean M. Louise Fitzpatrick, EdD, RN, FAAN.

Jadelhack successfully defended her dissertation proposal, “Assessment of a Patient Satisfaction Survey and its Relationship to Hospital Sector and Nurses’ Level of Education in Jeddah, Saudi Arabia,” at the end of February and will be conducting research for it in Saudi Arabia this summer.

Once she has completed her dissertation, Jadelhack said she is hoping it could prove to be a road map for improving health care throughout Saudi Arabia, and creating a more patient-centric system in the country.

Jeddah, Saudi Arabia, is located one hour east of Mecca. It is Raja Jadelhack's hometown and where she is researching patient satisfaction, ultimately leading to quality care and better health.