Healing and hope in Boston

While this year’s marathon finish line was elusive for many, clinical instructor and runner Sue Ellen Alderman sees Boston going the distance. 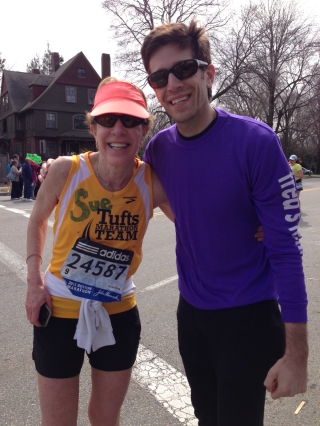 Sue Ellen Alderman and son Jesse who ran part of the marathon with her.

Sue Ellen Alderman, MSN, RN, PMHCNS, a clinical instructor of psychiatric-mental health nursing at the College of Nursing, has completed marathons across the country - but the avid runner’s favorite has always been the Boston race.

For Alderman, the Boston event - the oldest marathon in the country which began in 1896 and now draws more than 500,000 spectators annually - was a runners’ dream. It seemed like the entire city came out - everyone from new transplants studying at the area’s countless storied schools to Bostonians whose families have lived in the city for generations - to cheer on the approximately 20,000 athletes from across the globe.

This year, Alderman, as always, couldn’t wait to get to Boston and run the April 15 marathon - which she was doing to raise money for nutrition research at Tufts University, her alma mater. And, this year, she was particularly excited because one of her three children, her 31-year-old son Jesse, was going to be in the race with her.

It wasn’t until she and her son were not far from the finish line that Alderman and her son heard there had been an explosion. While she did not know it at the time, that turned out to be two pressure cooker bombs exploding at 2:49 p.m. near the finish line on Boylston Street. Three people died in the explosion, and 264 individuals were injured.

“We got about a half mile away from the finish, and everybody started saying, ‘Stop, the race is stopped,’” Alderman said. “Everybody was frenetic. Nobody knew what was happening. I was in a complete daze.”

As Alderman and her son located her husband, Mark, and her son's fiancée, Anna, and walked back to her son’s Cambridge apartment, federal law enforcement officials and Boston police began an unprecedented manhunt for the two suspects, identified by the U.S. Federal Bureau of Investigation as brothers Dzhokhar and Tamerlan Tsarnaev. Following the bomb explosions, the two brothers allegedly killed an MIT officer, carjacked an SUV and fought police with gunfire in Watertown, Mass., during which Tamerlan Tsarnaev was killed.

After law enforcement officials essentially shut down the city - residents were not allowed out of their houses and shops were temporarily closed - Dzhokar Tsarnaev was captured hiding in a boat in Watertown.

As a nurse, one of Alderman’s first thoughts following the blasts was: How do I help? While she was too far to get to the site of the explosions to immediately assist victims, Alderman said many of those impacted by the bombings are going to need both physical and emotional support as they process the event that sent shockwaves throughout the city and beyond. She foresees them potentially experiencing post-traumatic stress disorder. And, Alderman said, she is hoping she may be able to lend a hand to some of those individuals this summer.

“There are going to be so many lives that are changed forever,” she said. “They’re going to need so much counseling.”

While the day, which began with Alderman excitedly talking to runners from Iceland and Mexico, ended in tragedy, she said the fact that so many athletes and bystanders immediately jumped to help people following the blasts only further cemented that Boston is a city of strength and its residents will do nothing but persevere.

“To me, it said this city is so resilient and its people are so good,” Alderman said. “It was the whole city coming together.”

As Alderman herself continues to work through her own experience at the marathon, she said she is talking to students about the importance of nurses, and other medical personnel, being prepared for something like what happened in Boston.

“I am making sure I told my class and clinical group how nurses got out there and managed overwhelming trauma,” Alderman said.