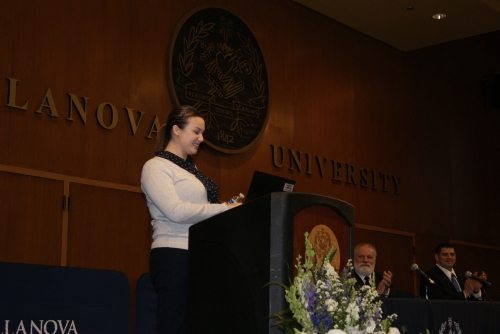 Alumna Marina Gallo discussed her project on waste disposal. Sharing the dais with her were Dr. Louis Hugo Franscescutti and senior John Barrow.

While the list of environment-related health problems, which ranges from heart disease to cancer and stroke, is a daunting one, Assistant Professor Ruth McDermott-Levy ’96 MSN, ’08 PhD, RN, stressed nurses are well poised to wage war on the environmental issues that take a heavy toll on health.

“We need to do something about this and nurses are positioned to speak out about what’s going on in communities,” said Dr. McDermott-Levy, who spoke during a panel discussion on environment-related health problems in North America during the College of Nursing’s 60th anniversary conference. 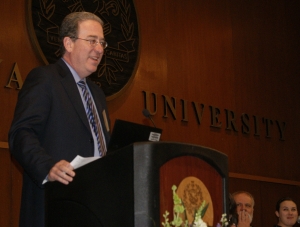 Dr. McDermott-Levy was joined by Marina Gallo ’12 BSN, RN and senior BSN student John Barrow on the panel, which was moderated by Brian McDonough, MD, FAAFP, a Board of Consultors member. It also included an overview by Dr. Louis Hugo Francescutti, a Canadian physician and expert in public health who was also one of the keynote speakers at the conference.

Dr. Ruth McDermott-Levy spoke about the role of nurses in environmental safety.

The problem is complex and far-reaching – of the 10 leading causes of death in the United States, all are related to the environment, McDermott-Levy said – but the assistant professor and students noted they are optimistic that they can tackle the issue. For example, Dr. McDermott-Levy said Villanova students have been working with immigrant communities and others on how to use safer products in their home, as well as with people on campus on how to avoid pesticides.

Additionally, Gallo worked on an independent project to implement recycling bins in Driscoll Hall’s nursing labs, reduce waste and generally mimic what other hospitals – like Abington Memorial Hospital or Main Line Health – are doing so the College could become a leader in waste reduction.

Barrow also stressed the importance of public green space and the impact it has on people’s health – which he studied during Dr. McDermott-Levy’s public health course. For example, he noted the correlation between a lack of green space in North Philadelphia and the tendency for people to shut themselves in their apartments.

“A lack of green space causes someone to isolate themselves from their environment and their neighbors,” Barrow said.

Video clip can be found here.