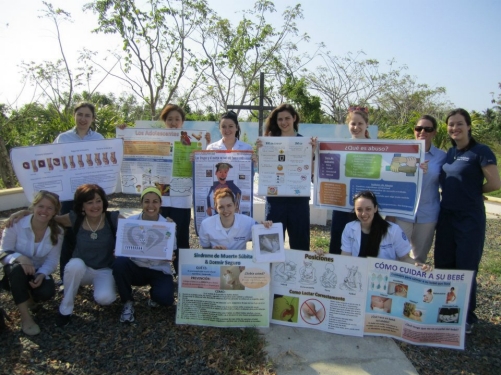 “I left Villanova with an open mind and a hope that I might make a difference in some way. I came back to Villanova a week later with seven new best friends and a fresh view of the world and the role I want to have in it,” explained senior nursing student Elizabeth Leddy. She and seven alternate sequence students   travelled to the Dominican Republic this past spring as part of their pediatric clinical rotation.  In her third year Visiting Clinical Instructor Kathryn Reynolds ’79 BSN, MSN, CRNP,RN  along with fellow alumna Lyndsy Wittmer ’12 MSN, CRNP accompanied the students on to their week-long trip to the bateyes in Quisqueya.

Medicines for Humanity (MFH), a nonprofit group “dedicated to saving the lives of the world’s most vulnerable children,” provides health promotion and assessments to care for the people in this southeastern region of the country.  The Daughters of Charity, their project partner in Quisqueya, is comprised of over 19,000 women in more than 90 countries who serve the poor and marginalized through healthcare and social services. Prior to their collaboration with MFH and the addition of a mobile clinic, almost none of the Haitians living in the batey communities had access to care. With visits twice a month to each batey, the mobile clinic utilizes trained health care providers including doctors, nurses and pharmacists to provide basic healthcare. Through their efforts, no child has died from malnutrition in the bateyes this past year. 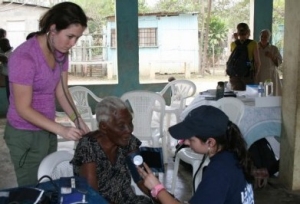 In collaboration with these organizations, students are given the opportunity to teach health promotion and provide basic nursing care to the Haitian people. Planning their lectures wasn’t their only activity before traveling. Prior to the trip, students raised over $3,000 through donations and fundraising events such as a night at Cosi' s in Bryn Mawr where the restaurant donated 10% of all the proceeds that evening to aid in funding desperately needed repairs to the mobile clinic van. Students also recognized vision care needs; many of the health promoters were over 35 and in dire need of reading glasses.  Students collected and distributed over 40 pairs of reading glasses that were critical so that health promoters could read the teaching materials the students created.

Visiting these communities each year maintains vital relationships. The student groups are welcomed and integrated into the mobile clinic health care team and community health promoters group.  The students have frequent opportunities for collaboration that they may not have experienced in some fast-paced acute care settings. 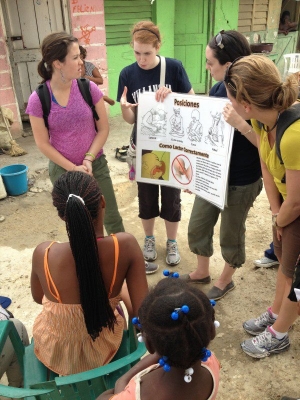 Students are encouraged to apply for these global health experiences as part of their clinical rotations and though they provide great opportunities for students to see a different side of healthcare, they do not come without challenges. Students are immersed in a new culture, with limited resources such as water, poor sanitation, and possible language difficulties.  “Language barriers are irrelevant when a group of people are passionate about working on the same goal, which in this instance, was to teach and provide forms of better health care in the Dominican Republic bateyes,” shared Dylan Wallace.

Intensive preparations are essential to success. Prior to the trip, health promoters from the Dominican identified needs on adolescent health, domestic violence, child abuse, breastfeeding and healthy pregnancy. Students worked closely with faculty to design creative teaching strategies as the educational materials had to be a reading level appropriate for their intended population. Then, students worked with the translators to interpret the information in Spanish. Health promotion is an important facet of these international experiences; in the midst of social injustices and impoverished communities, education can be used as tool to empower these communities to create lasting change. In return, the students gain cultural competence while also promoting health. “I was able to practice my nursing skills in a way no clinical rotation could provide” explains Judy Kim. 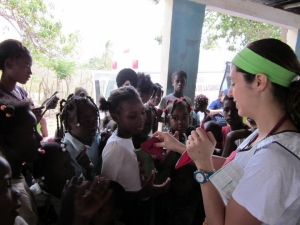 “The students are overwhelmed and excited at times which is expected but it’s been very rewarding to help the students grow in this experience,” explains Lyndsy Wittmer.

Lyndsy, who has previously traveled to the Dominican Republic  with the College as a graduate student, is finishing her post-master’s certificate in nursing education and used this experience as her practicum using the service learning pedagogy. She stressed the importance of the students teaching in the community and how patient teaching will play a vital role in their career as nurses as she recalled a woman she met in the bateyes. “This mother lived in one of the farthest bateyes we visited and had lost her daughter within the last year. She said her daughter died because someone in the community thought ‘bad thoughts’ about her daughter.” Lyndsy later found out from the health promoter that the woman’s daughter died from complications of dehydration.  “By educating the people we encountered with healthy living practices, we helped to empower them to save the lives of their children on a very basic level.” Education is something the students and groups can leave behind for the people; it is something sustainable and the power of this knowledge is immeasurable,” she noted.

“This experience made me realize what a critical role nurses have in education and health promotion,” says Dylan Wallace. As a student and a translator on this trip, she felt that this experience “allow you to think more on your feet. You are working with limited resources, so sometimes you have to think outside box.”

In the future, group leaders and faculty hope to continue communications with the promoters after the trips to help assess the effectiveness of the education and health promotion they provided. Dylan Wallace, who now follows Medicines for Humanity on Facebook, found a picture posted on their page of the promoters utilizing health education models the students created—evidence that their visit had empowered the community. Elizabeth Leddy expressed the importance of knowing that her time in the community has helped make a difference as she explained, “This trip has taught about the importance of being globally aware and my own responsibility to help ignite change no matter how big or small.”