Bridging the healthcare gap around the world 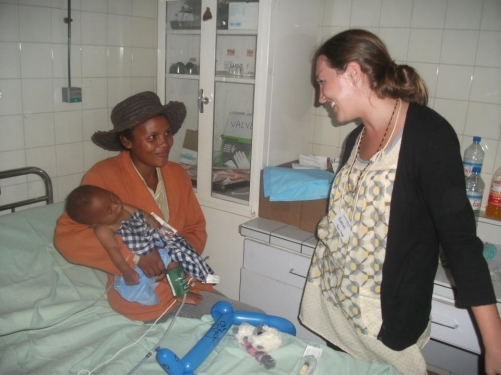 Hannah Ronning worked with Operation Smile on had a two week mission in Madagascar's capital city of Antananarivo. Peace Corps volunteers were asked to translate. Here, she was answering questions for a mother who had just been reunited with her child in the recovery room.

When most people hear the word “Madasgascar”, they conjure images of the DreamWorks animated film. When Hannah Ronning hears the word, she’s instantly taken back to her days in the Peace Corps—memories revealing a small fishing village called Vohitsara, next to Lake Aloatra, the largest lake in Madagascar. Situated in the eastern rice growing province of the island country, for two years, this is where she called home.

Joining the Peace Corps was something Hannah had always dreamed of doing; there she would get an opportunity not only to give back but to experience parts of the world she might otherwise never know. So, during her senior year at DePaul University, she started the application process. Upon graduating, she enrolled in pre-requisite courses for nursing programs when about a year later she finally received an invitation from the Peace Corps. Believing that there were no volunteer opportunities quite like the Peace Corps, this was an opportunity she couldn’t turn down.

From 2009-2011, she worked as a health education volunteer alongside a midwife at a local health clinic, mainly teaching women and children about common health issues such as water sanitation, vaccination and nutrition. She also conducted weekly weights to monitor newborn growth and did simple cooking demonstrations of appropriate weaning foods for the children. Some of her secondary projects included organizing a group of community health workers to continue health education in locations even more remote, starting a micro loan program for middle school aged girls so they could earn money to pay for school, and a 10 day traveling festival to educate the Lake region on HIV/AIDS.

Originally set to serve in Niger, Africa but sent to Madagascar instead for security reasons, she figured during her two years overseas she could reaffirm her decision to pursue a career in nursing. Working as a health education volunteer gave her an intimate view of the healthcare inequities across the globe, seeing first hand that much of the population still does not have access to basic health care services. Though her role as an educator was rewarding, it lacked the opportunity to provide hands-on skills she could use to supplement her experiences and that would allow her to serve most effectively. After completing her time with the Peace Corps, she wanted to continue her explorations and studies stateside so the search for schools began. Ultimately, she would leave her home in Canton, Ohio and embark on a journey as an adult learner in Villanova’s accelerated nursing program, choosing the College of Nursing, noting it’s “great reputation and focus on outreach and volunteerism were the perfect fit.”

Hannah’s volunteer efforts did not begin nor end with the Peace Corps; she served as a Malagasy language translator with Operation Smile while in Madagascar and has also volunteered with her father through Medical Ministries International on two different Ophthalmology mission in Columbia and Peru, working with pre and post-op cataract patients. Now here at Villanova, Hannah and fellow returning Peace Corps volunteers continue to serve by coordinating the Nationalities Service Center in downtown Philadelphia, working with newly arrived refugee populations. Her global experience have given her a new appreciation for healthcare disparities, and realizes that “regardless of background and education, people are all the same when it comes to facing a life-threatening health concern, and deserve to be treated with the same respect and compassion.” Her goal is to use this understanding to become a more compassionate nurse, eventually pursuing a duel masters in nursing and public health, with a focus on international concerns so she can continue to bridge the healthcare gap.

Hannah and fellow Peace Corps volunteers participated in a regional festival to educate the Malagasy people about HIV/AIDS.

Hannah joins a local midwife and other health workers outside of their local clinic.

Hannah dances with a village elder at a traditional 'turning of the bones' ceremony (Famadiana), which celebrates the ancestors.