People helping people: The philanthropy of Thomas and Diane Treacy 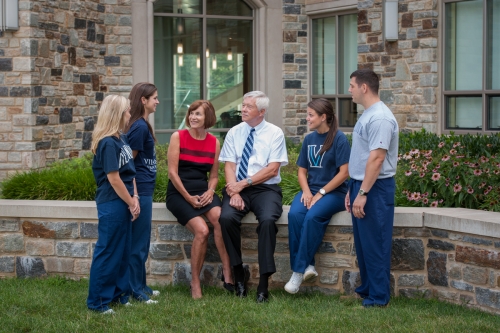 It was more than just Christmas cards. It was a defining moment for Thomas Treacy '69 BS, '71 MA, EdD.  As a Villanova student earning his education degree, Dr. Treacy was involved with an ad hoc student group Mail Call Vietnam that focused on service. Over several years they sent hundreds of thousands of Christmas cards to service members in Vietnam. “We just wanted to do something for Americans who were in the service of our country. Although I wasn't aware of it at the time it was a life-changing event. My grades suddenly improved. I was motivated. Doing something for others was important - big or small - it mattered,” he recalls. It mattered on a bigger stage as well. While a student, Dr. Treacy was honored in the White House Oval Office by the president for his civic activities.

Dr. Treacy went on to work in public and private education for 40 years; half of those were spent as adjunct faculty in Villanova’s Graduate Program. He is an educational consultant and licensed psychologist who recently retired as president and owner of the Antonelli Institute in Erdenheim, Pa.  He lives in Naples, Fla. with wife Diane ’82 MS, a retired development professional who worked for state government and various non-profit agencies. She received national recognition for coordinating grassroots advocacy for passage of the Americans with Disabilities Act.

As zealous football fans and loyal alumni, the Treacys have retained strong ties to their alma mater. They have designated a testamentary gift to the College of Nursing Center for Global and Public Health.  The Treacys' philanthropy will benefit the College and its students by funding program management of numerous opportunities for students to interact with underrepresented populations around the globe. Dr. Treacy says the planned giving gift was “an obvious decision” given their degrees, employment and relationships with Villanova. 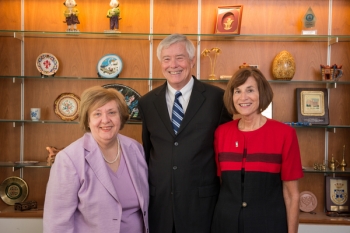 Dean Fitzpatrick (left) explained to the Treacys the work of the College's Center for Global and Public Health and students who promote health around the world. "How can you not support that?" says Dr. Treacy.

The Treacys thought carefully about identifying areas of the University to receive designations of their planned gift. Dr. Treacy explains, “We had to identify areas of need and areas to meet our desire for service. We first decided to endow the football Head Coaching position (Andy Talley's bone marrow screen initiative is what service to others is all about)….I was asked to meet with Dean Louise Fitzpatrick who spoke of her efforts to establish a Center for Global and Public Health. She explained how nursing students were taking time to go visit villages in Africa, South and Central America to provide public health skills to local populations. She told me how her students would return changed.  I was hooked. A Villanova program that would have a profound impact not only on students but on others. How can you not support that?”

In its simplest terms, the Treacys were drawn to supporting the Center because it is, as Dr. Treacy says, “People to people, people helping people, we change the world one small step at a time.”

Dr. Treacy is also a member of the College’s Board of Consultors. He finds the Board to be a diverse group with interesting ideas. “My area of interest is to focus attention on development for current and future needs in the College of Nursing. I would like the College to continue its efforts with endowment activity,” he explains. He is impressed with the work done at the College, “I quickly realized that the College was preparing nurses not only for current requirements in the field but was also readying them for future challenges in the field. Just spend a few minutes talking with a Villanova nurse or nursing student and that becomes apparent,” he notes.

While uncomfortable with the label “philanthropist” the Treacys hope to influence others and thus have allowed their story to be told.  Dr. Treacy explains, “It’s to publicize the extraordinary process of planned giving. Simply put, planned giving is a little known aspect of development. Even if one has limited assets, not just money, one can partake in planned giving.  It is amazing how many ‘Nova grads who have heard my story will say ‘I didn't know you could do that! That's what I am going to do.’”

For the Treacys it comes down to serving others and giving back. As Dr. Treacy summarizes, “There isn't a day in my life that I am not thankful for my Villanova experience.”