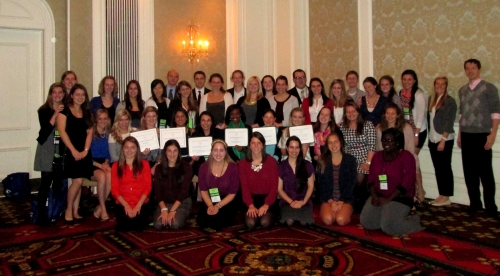 Friday, November 16th marked the 60th anniversary of the Student Nurses’ Association of Pennsylvania (SNAP) annual convention bringing students, nurses and faculty from across the state to the beautiful Laurel Highlands in Farmington, PA. Once again, Villanova was widely recognized at the event, represented by 40 students and led by SNAP-Villanova President Ashleigh Morris and Vice Presidents Sarah Gross and Julie Kurkowski accompanied by long-time advisor, Associate Professor Carol Toussie Weingarten PhD, RN, ANEF. Villanova’s delegation was the most diverse including traditional students, freshman through seniors, alternate/transfer students as well as students in the BSN Express program. The delegation was also joined by two students from Harcum College, as Villanova is mentoring Harcum in the establishment of their chapter of SNAP.

The convention recognized Villanova by presenting the chapter and its delegates with several awards including Most Outstanding Chapter in Pennsylvania, State Community Health Award for the McDaniel School projects, and Advisor of the Year. The Chapter Newsletter and its editors Maggie Fenton and Marie McClure were named runner up and two delegates, senior Jennifer Gil and junior Lisa Novak, were awarded Scholarships for Excellence. The convention also rendered potential jobs and other opportunities as delegates networked with various recruiters at the event.

Villanovans have long held positions on the state SNAP board, dating back to 1984 or perhaps even longer; an unofficial state record. This year, two students were elected to the 2012-2013 board with the re-election of Jennifer Gil as Philadelphia Region Coordinator and sophomore Elizabeth Long, who currently holds the Legislative Coordinator for Villanova’s SNAP chapter, elected Legislator Coordinator for the state. Junior Karley McBreen also serves on the state Resolutions Committee. Also for the last 30 years or so, Villanovans have authored resolutions, with this year’s submission, In Support of Awareness and Education on "Joining Forces" and Nursing Education on Traumatic Brain Injury (TBI) and Post Traumatic Stress Disorder (PTSD), being passed by the House of Delegates. The resolution also is congruent with the College of Nursing's "Joining Forces" initiative.

A well-deserved congratulations to SNAP-Villanova and all its contributors for their continued achievements and recognitions at the state, and also the national, level. Their talents, dedication and daily involvement reflects the chapter’s commitment to education, professional development, service and the formation of networks and friendships.

SNAP-Villanova President Ashleigh Morris (4th from left) and chapter advisor Dr. Weingarten (3rd from left) hold the outcome of their hard work, shown here with their SNAP colleagues and officers.