Leveraging nursing research to save lives 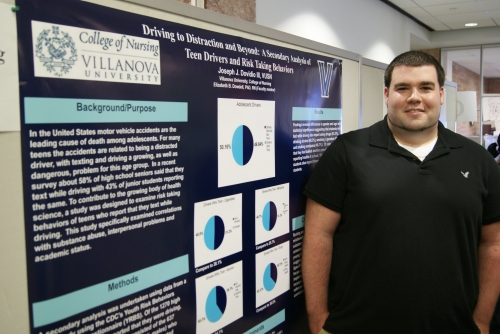 Joseph Dovidio presented a poster showcasing his secondary analysis of data relating to texting by teen drivers. He hopes to prevent accidental deaths in the adolescent population through more research and a career in emergency nursing.

According to the Centers for Disease Control and Prevention (CDC), 15 people are killed every day and more than 1,200 are injured in accidents reportedly involving a distracted driver. The CDC classifies distracted driving activities as anything that takes attention away from driving including talking on a cell phone or texting, which has been shown to distract people from driving more frequently and for longer intervals of time than other distractions. The CDC also pointed out that younger and inexperienced drivers, those under the age of 20, potentially have the highest risk because they have the greatest proportion of distraction-related crashes ending in fatality.

When junior nursing student Joseph J. Dovidio III from Doylestown, Pa. came across this information he was shocked and felt compelled to investigate further. His research project “Driving to Distraction and Beyond: A Secondary Analysis of Teen Drivers and Risk Taking Behaviors”  involved a secondary analysis using data from a 2009 study done by Professor Elizabeth B. Dowdell, PhD, RN, faculty mentor for his Villanova Undergraduate Research Fellowship (VURF). Dr. Dowdell’s study, funded by the U.S. Department of Justice Office of Juvenile Justice and Delinquency Prevention, focused on Internet risk behaviors and provided an avenue for Joseph to pursue his mission of analyzing preventable deaths in adolescents. He felt a great deal of responsibility for this population as a future nurse because, as he noted, “the number one cause of death as reported by the Centers for Disease Control and Prevention is still accidental injury.”

Joseph’s VURF study involved 1,270 school students who reported they were driving, with a group consisting of the 637 adolescents who self-reported texting and driving.  His findings revealed differences in gender and age with statistical significance suggesting that students who text while driving also report engaging in other risky behaviors; thus, leading Joseph to suggest important areas of intervention with teens. Specifically, he proposed interdisciplinary educational programs that focus on prevention, risk reduction and safety. He also suggested the use of an evidenced-based practice model that incorporates a screening tool, brief interventions, and referrals for treatment for at-risk adolescents with correlational risky behaviors.

Joseph presented his findings at the 2012 Villanova University Undergraduate Research Poster Session on September 19th.  Dr. Dowdell assisted Joseph with his proposal and in accessing and analyzing data. She also helped Joseph with writing a professional abstract for submission to the Eastern Nursing Research Society’s 25th Annual Scientific Sessions this April in Boston and is waiting to see if he will be selected to represent the College of Nursing.

As a student, Joseph came to Villanova with extensive academic experiences. Originally planning to attend medical school, this former pre-med and biology major at Gwynedd-Mercy College, worked for three years at a local area hospital in Doylestown to gain healthcare experience. It was then he realized through interactions with patients and nurses that he wanted to change direction and pursue a career in nursing. Joseph took the mandated prerequisites and was accepted into Villanova’s College of Nursing. He feels he has made the right decision in coming to Villanova, saying, “This entire process gave me a greater respect for my new chosen profession as well as for future academic pursuits towards higher education.”  He plans to continue such research as an undergraduate as well as in his future graduate studies. It is in trauma and critical care where Joseph feels he can have the greatest impact in preventing injuries and accidental deaths, especially within the population he studied.

Joseph’s work on this study has also shown the academic community his commitment to nursing and seeking answers to issues through evidence-based practices. His faculty mentor Dr. Dowdell affirmed that “throughout the entire VURF process Joseph has repeatedly demonstrated to me that he has a mature insight and willingness to seek answers to questions, a direct result of being part of the Villanova community of scholars.”