Bringing a new life into the world -- together 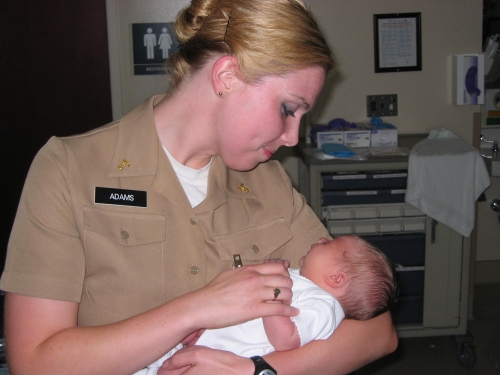 When the College of Nursing solicited three words from alumni and friends to describe Villanova Nursing for National Nurses’ Week in May 2012, we learned even more about our wonderful alumni and the network of Villanova Nurses in the community.

One submission in particular, that from Louise Giannotti McKernan ’98 VSB, caught our attention. Her three words were “Delivered our daughter” with the photo showing a rising senior holding a newborn.

Louise went on to offer the following: “As a 1998 Villanova graduate, I was thrilled that a Villanova Nursing student and fellow NROTC midshipman Maura Adams (’07 BSN) helped deliver our daughter, Annabella, in July 2006. It was during her NROTC midshipman summer training in July 2006 at Naval Hospital Pensacola.  We were literally singing ‘V for Villanova, V for Victory’ during the delivery!” As a former orientation counselor, Louise knew all the school songs.

Louise found Maura to be “the nicest girl.  She wrote us a letter after the Villanova NROTC Commanding Officer received and read to all of the midshipmen the letter we had written.  She said it was motivating to hear what we had written.” She goes on to say, “Maura was fantastic, and I couldn't have asked for a better nurse.”

Maura, now a lieutenant, recalls, “I remember that day quite well, actually. It made me realize I had chosen the right profession!” She went on to a career as a Navy nurse, having deployed to Kuwait last year to assist with the withdrawal from Iraq.  Specializing in emergency nursing for the last three years, she was recently stationed in Naples, Italy though will shift from active to reserve duty in August. Maura plans to use the GI bill to earn her master’s degree over the next two years at Catholic University which is close to her family and looks forward to studying advanced nursing in public and community health. As an ED nurse, she has not delivered any other babies except for one several years ago in the Norfolk hospital parking lot.

Louise, married to Major Bryan McKernan, USMC who is a helicopter (CH-46) pilot based in Okinawa, Japan, is a mother of three children. A civilian now, she currently works for ReMilNet, consulting for the Department of Defense. Six year old Annabella is a bubbly, friendly little girl who loves to dance and sing.  She's a Daisy Girl Scout who starts first grade this fall and can hold her own with her two brothers Jack and Bryan.

Annabella, who just turned 6, loves to dance and looks forward to Daisy scouting.