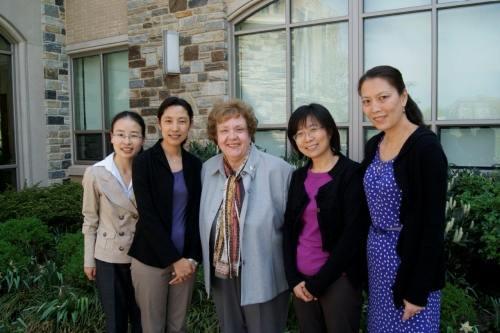 The Chinese nurses met with Dean Fitzpatrick and other key people in the College, learned about the clinical simulation labs as well as visiting classroom and clinical areas. They were accompanied by Dr. Bing Bing Qi, assistant professor, and Feifei Yang, a master’s student in nursing education who is from Weihui, Henan, China. After graduating from Beijing Medical University, Dr. Qi taught Dr. Lu in one of her first classes. Dr. Lu was also in Dr. Qi’s graduate classes that she interpreted and co-taught with professors from the Unites States after she earned her master’s degree from Villanova. Another alumna from the master’s program, Hong-Yu Sun, is currently associate dean and a colleague of the visitors at Peking’s School of Nursing.

Drs. Lin and Lu have been in the United States since January, funded by the New York’s China Medical Board, an independent U.S. foundation that aims to advance health in China and neighbouring Asian countries through strengthening medical, nursing, and public health research and education They have been scholars in residence through the Hartford Foundation, spending time at University of Pennsylvania School of Nursing and NYU’s Hartford Institute for Geriatric Nursing.