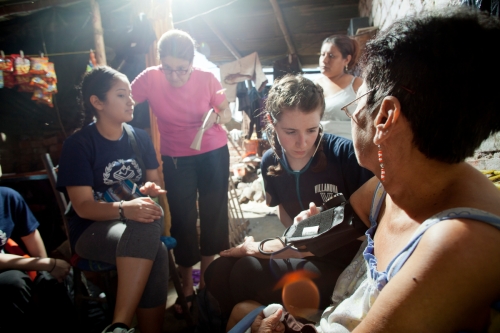 How a motivated student exceeds a mother’s dreams

When Lida Castañeda de Gil emigrated from Medellin, Colombia to settle in New Jersey in 1986, this non-English speaking mother may not have dreamed of having a daughter who would be a nurse. Three years later, Jennifer was born. Her mother, who became a single parent when her daughter was a toddler, supported three children through housekeeping jobs. She had never reached middle school yet saved and hoped.

Jennifer was the first of the children to graduate high school. The family pitched in to send her to her mother’s homeland so she could connect with her roots.  “I had the opportunity to shadow one of my cousins while she worked as a nurse in a neonatal intensive care unit at a local hospital. Through shadowing her, I found my ultimate calling to pursue a career in nursing. I decided that with determination and hard work no matter what my station was in life, I had the power to change my destination,” notes Jennifer. Describing Medellin, the junior from Clementon, N.J. says, “Most of my family still lives in poverty there today. After witnessing all the health disparities they experienced, I knew that I wanted to be a nurse more than anything in the world.”

Returning from Colombia, Jennifer wasted no time in seeking advanced education. She qualified for free tuition and enrolled as a pre-nursing major at Camden County Community College where she became president of the Human Services Outreach Club and earned an associate degree while working full time in a childcare facility. Next, Jennifer set her sights on a bachelor of science in nursing (BSN) degree. Piecing together grants, loans, and a part time job for support, she matriculated as a BSN student this academic year starting fall 2011, landing on the Dean’s list.

Jennifer’s drive is evident in the speed with which she established herself as a leader. She recalls, “I immediately became active with Villanova’s chapter of the Student Nurses’ Association of Pennsylvania (SNAP), where I have built diverse friendships and networks. With the encouragement of my chapter, I ran for and was elected to the state student Board of Directors of SNAP and recently represented Villanova on the National Scholarship Selection Committee of the Foundation of the National Student Nurses Association.”She also volunteered at an elementary school serving one of the financially poorest areas of Philadelphia. 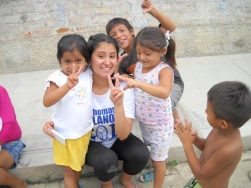 “In Colombia, I realized that I could overcome the barriers that exist for so many people from my background. As a nursing student, I have known opportunity and welcome; with that comes my responsibility to be a role model for others,” says Jennifer Gil, here in Chulucanas, Peru where she served as translator for a health promotion practicum.

In this same year, Jennifer, who is bilingual, traveled to Peru in March as a translator for the senior student group’s health promotion practicum. In late May she heads to Durban, South Africa for two weeks for an international field experience in nursing focusing on poverty and HIV effects on health and society.   Jennifer calls the Peru experience life-changing. “It changed entire view on my future career in nursing and overall life. This experience allowed me to find my true passion for global health and my ultimate calling to become a nurse practitioner and continue to do these service trips for the rest of my life.“

Achievements continued for Jennifer. “My year ended with being selected for the Hausman Fellowship Program at Massachusetts General Hospital,” she says with palpable excitement. The Hausman Fellowship is a 10-week paid program developed for minority student nurses, allowing students to explore their primary area of interest but also incorporates various educational experiences--inpatient and outpatient. Jennifer is the first Villanovan accepted into the highly selective program which draws candidates nationally. There are also mentors for the students and opportunities to interview the senior hospital leaders about their roles. Additionally, Jennifer says, “I will be working on a lecture on health care disparities or the needs and care of diverse populations. This lecture is a requirement and I will need to present it at MGH and if permitted, at Villanova University.”

Jennifer looks forward to learning more about opportunities in nursing especially critical care and trauma but approaches her career with an open mind. Regardless of specialty, she knows she wants to be involved with addressing health disparities. She saw effects of inequities in Colombia, as well as with her mother, with whom she was in a car accident. Her mother still has lingering disabilities such that she is unable to work. Jennifer handles all her paperwork and takes calls from her providers to translate or offer health histories in English. “Witnessing firsthand the difficulties that my mother has faced and becoming in charge of all her medical appointments and paperwork, is my prime motivator,” offers Jennifer. She continues, “My experiences here at Villanova inspired me to embrace my cultural identity. Being able to take part in global experiences, like Peru and South Africa, gave me the passion to direct my nursing career to address health care disparities.”

After earning her BSN in 2013, Jennifer wants to continue her education, culminating in a doctor of nursing practice degree, conduct nursing research and focus on global health disparities. She will continue to give back, explaining. “Throughout my career, I hope to inspire and encourage other minorities to have goals and meet their goals through education.”

Jennifer values the support, sacrifices and the rich culture of her family. Here she is with brothers Johnny (left) who attends UNC-Chapel Hill and Fabian who works for International SOS. With them is proud mother Lida.