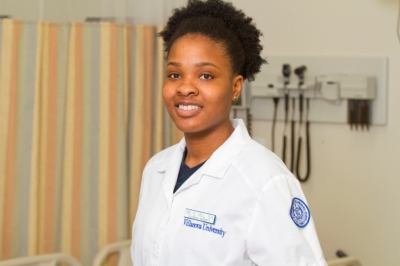 Erica Hill’s eyes have seen a lot in short time. The St. Louis native, now 29 years old, was inspired to change careers after watching nurses care for her mother over many years and multiple hospital­izations due to lupus. However, nursing was by no means a direct route. Hill came to it after being a West Point cadet and an Army officer immersed in a world of vehicles, systems engineering and securing supply chains in a combat zone.

As a cadet at the highly selective United States Military Academy in West Point, N.Y., Hill was on the track team, throw­ing hammer and weight, while earning her bachelor’s degree in political science with a field of study of systems engineering. At graduation in 2006, she was commissioned into the U.S. Army as an ordnance officer, in charge of maintenance soldiers who repair wheeled and track vehicles, aircraft, radios and generators. She has seen duty in California, Korea and Afghanistan.

At her last duty station, in Kabul, Hill served as a security assis­tance officer, coordinating the delivery of supplies into Afghani­stan, as well as training Afghan officers on the supply system. After being involved in the critical moves of medical supplies, weapons, and vehicles needed to sustain the Afghan National Army, as well as the country, she wanted to do more to help people. She researched nursing programs and chose the College of Nursing’s accelerated B.S.N. program, since it offered faculty invested in student success, just as she had experienced at West Point.

Transitioning out of the Army and gearing up for an intense nursing program was challenging, but as a seasoned, disciplined student she was able to focus and multitask. Hill feels she brings to nursing “an eagerness to learn. I am a hard worker as well as a team player.” She wants to become a nurse practitioner, aiding developing countries.

“As a former Army officer,” Hill says, “I bring a different per­spective to life, especially after deploying to a combat zone.” She is aware of the differences in responsibilities in the Army and in nursing, and finds her new profession fulfilling. Now she provides her family with enjoyable updates. “I love nursing. I call home weekly, and tell my family about what I have learned.”