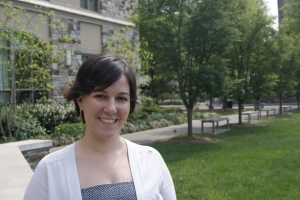 Adriana Ruiz comes from a small Latino community in Miami. “My parents are Cuban immigrants and struggled to adapt to a new country with different values, laws and ideals,” she says. “I grew up largely without access to health care, and I know many others like me in the Hispanic community,” she explains. “I have a large interest in helping to make health care available to minorities in ethnic communities,” especially those similar to the one in which she was raised.

Ruiz has talents in a variety of areas, among them performing as a drummer and fluency in Spanish. She attended Florida International University to earn her bachelor’s degree in journalism and later wrote for the Orlando Weekly. While in school and launching her writing career, she became a licensed massage therapist.  She enjoyed both her work and promoting health to her clients, but more powerful influences began to influence her career path. She researched nursing programs and selected Villanova’s because the College of Nursing “offers its students a wealth of knowledge and support—from its dedicated instructors to its accessible and accommodating staff.”

“The many years I spent as a therapist working one-on-one with clients has given me a stronger insight into working with patients in a hospital setting,” Ruiz notes. Studying in the College of Nursing’s accelerated B.S.N. program, Ruiz understands the value of her experience and how it translates to nursing. “As an adult I am better equipped to handle a career in nursing,” she says. During a behavioral health rotation, she integrated massage therapy techniques into her patient interactions, an approach that received positive feedback from her faculty.

Future plans involve starting a career caring for neurology patients and later moving into advanced practice. “I plan to get a master’s degree as a nurse practitioner and work in a low-income, ethnic community like the one in which I grew up,” Ruiz says. “Health prevention has always been a vital topic that should play a larger role in health care.”