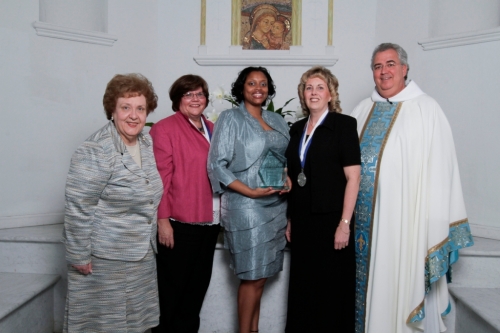 Paparella demonstrates continued leadership in patient safety on a national and global stage.  She is responsible for the development and oversight of ISMP’s consulting and educational services and networks with constituents such as government agencies, accrediting bodies, health care providers and consumer stakeholders. Paparella facilitates proactive safety risk assessments, root cause analyses and patient safety-oriented conferences in the U.S. and abroad. In short, she uses her comprehensive knowledge and background to influence changes in practice and to improve patient care outcomes.

Paparella noted that Villanova ignited her desire to learn and taught her she could have a voice outside the walls of a hospital. She was “inspired by faculty to think critically and act compassionately in service to others.”

Dr. Salmond has a long and distinguished career in nursing education. Among numerous accomplishments, she has led her school’s implementation of New Jersey’s first Doctor of Nursing Practice degree program, and also established master’s degree programs in nursing education, women’s health and clinical leadership. She is co-director of the nursing school’s New Jersey Center for Evidence-Based Practice, one of three partnering centers in the country of the international Joanna Briggs Institute.

Dr. Salmond explained that Villanova prepared her for a career and the subsequent opportunities that were presented to her. She was appreciative of the “values-based education” she received which also gave her the confidence that she could change the world.

Dr. Brawner is an emerging scholar of distinction. Having earned her PhD by age 27, she has been the principal investigator on several funded grants and within the last few months was awarded a grant by the U.S. Center for Disease Control & Prevention in the amount of $932,000 entitled: “Prevention Among Heterosexually-Active Black Adolescents with Mental Illness”. Her interest in finding ways to assist vulnerable populations, create health equity and eliminate health disparities is further demonstrated in what is already a long and impressive list of her refereed publications. Her premise that mental and physical health concerns must be treated in an integrated manner is a hallmark of all her work. In addition, Dr. Brawner has been involved in community activities, mentors students , has been a consultant in Botswana and a Visiting Research Fellow at the Center for Interdisciplinary Research on AIDS at Yale University.

Dr. Brawner described Villanova nurses as “healers in practice, education, and research for the communities we serve.” She says her undergraduate nursing education, embodying the spirit of caritas and veritas, shaped her as both a nurse and individual.

The College of Nursing honored faculty and administrators for long term service. Alumna Rose Woytowich O’Driscoll, ’64 BSN, MSN, RN, assistant dean for administration and assistant professor was lauded for 40 years of service to the College. The Dean cited her as a “loyal Villanovan,” valued not only for her knowledge, skill and service but her eternally positive outlook.

Nancy Sharts-Hopko, PhD, RN, FAAN, professor and director of the PhD in Nursing Program, is a “model faculty member, an excellent teacher who provides academic and professional service” says Dean Fitzpatrick, “There is nothing she can’t do.” Dr. Sharts-Hopko celebrates her 25th anniversary with the College.