Heath disparities: “It doesn’t have to be this way” 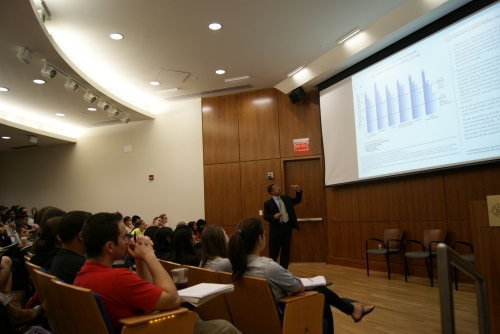 “Of all the forms of inequity, injustice in healthcare is the most shocking and inhumane.” –   Rev. Martin Luther King

On Tuesday, Sept. 27th, Dr. Calvin B. Johnson, President of Altre Strategic Solutions Group, presented the 17th annual Health and Human Values Lecture “Health Disparities.”  Dr. Johnson’s background of clinical practice, service and government combined with his national leadership roles brought a unique perspective to the discussion on communities and health disparities. He is a former Secretary of Health for the Commonwealth of Pennsylvania and Vice President and Chief Medical Officer for the Temple University Health System in Philadelphia.

As Dr. Johnson spoke about health disparities in the United Sates, and more specifically here in the Philadelphia region, his insightful presentation was well received by a packed audience in the auditorium of the College of Nursing’s Driscoll Hall.

Dr. Johnson began by defining health disparities as the differences between groups of people in terms of how frequently a disease affects a group, how many people get sick or how often the disease causes death.  He went on to actively engage the audience by presenting clear examples of how social, economic, transportation, ethnicity, race, and geographic  issues can all impact the health of an individual or family.  He highlighted the clear disparities in overall health between the ethnic groups in the United States and went on to identify that not only do disparities exist between ethnic groups but also within the socio-economic sectors within ethnic groups.  He illustrated his case by using both local and national statistics on breast cancer deaths, obesity rates, and access to care.

Dr. Johnson stressed that health disparities exist across all socioeconomic and ethnic lines and illustrated how an African American rural mother can easily have the same difficulties accessing care as an urban Hispanic father.  He indentified the fact that babies born to mothers who did not finish high school are nearly twice as likely to die before their first birthday as babies born to mothers who are college graduates.  He went on to highlight the need for health care providers to understand disparities within the context of the life of the patient.  He further illustrated his case with two examples of how urban settings can impact young lives.     He discussed the urban child who may not be allowed to go outside to play because the streets are unsafe.   Now, rather than running and playing outside, the child is watching television or playing video games inside which can contribute to his obesity. He also mentioned how easy access to fast food combined with lack of access to fresh fruits and vegetables in an urban environment can adversely affect health.

Started in 1994, the Health and Human Values Lecture Series is an annual series of lectures supported by a grant from the Johnson and Johnson Family of Companies. The theme of this year’s series is Promoting Dignity through Global and Public Health.