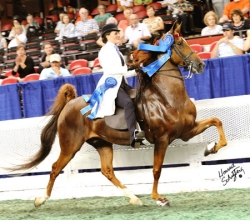 Underneath the derby, part of the formal attire required in saddle seat competitions, there is the mind of a nurse. Ally Ehle, a Villanova nursing student, earned a victory lap around the show ring in August 2010 after she and Tony (show name CH Titleist Right Tonight) were crowned World Champions in the Adult 5-Gaited Pleasure class at the World’s Championship Horse Show in Louisville, Ky.

Villanova, PA, May 10, 2011 — Villanova University has claimed numerous world class athletes—well known in sports such as basketball and track to name just two. But look closely in Driscoll Hall and you’ll see another world champion in junior nursing student and equestrian Allyson Ehle. Ally, who is from Orefield, Pa., is a member of the Class of 2013 studying at the College of Nursing. As a former national champion and current world champion in saddle seat, Ally echoes Winston Churchill’s sentiment that “No hour of life is wasted that is spent in the saddle.”

Developed in the United States, modern saddle seat is a style of English riding designed to show off the high trotting action of certain horse breeds. It is done on the flat, meaning there is no jumping (something Ally did when she first started riding at age seven). Ally started riding saddle seat at age nine and has competed on American Saddlebred horses in the 5-gaited class which includes the walk, trot, and canter, as well as a fast, showy gait and a slow gait.

Being an active sorority sister and student in a challenging major would be enough to keep anyone busy. Add in weekly three-hour round trip drives to the New Jersey barn where her horses are stabled, and you realize Ally is an expert juggler as well. “Balancing school and riding is difficult, especially during show season,” she admits, which luckily is mostly outside of the academic year. She is grateful to her professors for their flexibility and is as dedicated to her schoolwork as she is to training for competitions. Her commitment results in not only excellent grades but also blue ribbons.

“I am very fortunate to own and work with some of the greatest and most talented horses in the country and none of my accomplishments would be possible without them,” explains Ally. In 2009 at the National Championships in Kansas City, Mo., she and Winston (show name CH Sir Winston C) were named the Country Pleasure National Champions for riders 18-30. That same year, she and Tony (show name CH Titleist Right Tonight) were crowned the 5-Gaited Show Pleasure National Champions and Grand Champions for all adult riders. Through August of 2011, she and Tony carry the title World Champion which they won last summer in the Adult 5-Gaited Pleasure class at the prestigious World’s Championship Horse Show in Louisville, Ky. “It is an honor to even compete at the World’s Championship which is why winning there is one of my proudest moments to this day,” Ally notes. In October, she exhibited at the World Equestrian Games in Lexington, Ky., a competition held every four years with over 50 countries competing. She and Tony were invited to provide a saddle seat demonstration which was “pretty exciting.”

Ally credits her mom, Nancy Ehle ’81 B.S.N. as a major influence in her life. “She is one of the reasons I chose Villanova and nursing,” offers Ally, noting that her father is also in the profession as a nurse anesthetist. “My mom has been riding for years…We like riding and traveling to shows together.” Riding has had a positive effect on Ally’s growth, “I have developed a lot of patience through riding which I think helps my performance as a nursing student. I also think that over the years riding has contributed to my overall confidence as a person” which is an asset in patient care.

Ally’s devotion to her rigorous academic life means tough choices. She is missing a favorite competition this year, the local Devon Horse Show, so that she may enhance her global perspective and study abroad for five weeks through Villanova's Summer Program where she will take courses in medieval Catholicism and the history of Italian cities.

Ally looks forward to further challenges both in her career and in the show ring. She describes her goals, “In a few years, I hope to be working as a nurse in a Philadelphia-area hospital. The more experience I get with nursing, the more I think I would like to work with children but I've also considered becoming a nurse anesthetist. We'll see what the future brings.” No doubt it will include more blue ribbons.