Transforming horror into hope in Haiti

Villanova, PA, March 15, 2010 — Barbara Ott, Ph.D., R.N. is no stranger to challenging nursing environments. She has shared her critical care nursing skills in some of the most harsh places the world has to offer, caring for children through Norfolk, Virginia’s Operation Smile in such countries as Thailand, the Philippines, Honduras, China, Russia, Morocco and Brazil. She was compelled to volunteer for one of the organization’s recent teams sent to Haiti.

In late February, the associate professor at Villanova University College of Nursing joined about a dozen other health care professionals, including nurses, orthopedic surgeons, and nurse anesthetists, for the 10-day effort in Fond Parisien, just outside the capital Port-au-Prince where the January 12th catastrophic earthquake occurred. Some team members moved in and out so the number varied over time. Staff ate beans and rice twice a day, slept in tents and worked long hours in a physically demanding environment. Not trusting the safety of the buildings on the property of an orphanage and school, her team set up its operations in a small tent city next to a refugee camp run by the Harvard Humanitarian Initiative. It is a place where the “walking wounded”—people of all ages with recent amputations—are the new norm. Challenged by the scarcity of crutches, they are either immobile or lucky to find help.

Moving outside of its usual pediatric facial deformity repair surgery, the Operation Smile team handled at least 60 adult and pediatric orthopedic cases, including amputation revisions (removing more of an affected limb due to tissue death or infection), rod placement to stabilize bones, and removal of external fixation devices in bones that healed. The two operating rooms were sterile environments in tents. The triage and post-operative recovery areas were not, with 130 degree temperatures, dirt floors and an invasive, persistent layer of dust that settled over skin, sterile packaging and other equipment. Yet, the nurses provided high quality care, somehow managing to have zero infections at pin sites (pins are the small metal pieces inserted through the skin to keep a healing bone in place)—a fact duly noted by the naval commander of the USNS Comfort hospital ship that transported patients to and from the Operation Smile makeshift hospital.

Each pair of nurses shared a translator who spoke the native Kreyol. Among the 259 patients, Dr. Ott saw severe wounds, recalling one woman whose wound occurred when she was pulled out of a building, causing her skin and muscle to shear off her foot, exposing bone. Her options were to “become septic and die or to be a 79 year old amputee in Haiti,” notes Dr. Ott. The patients lived two in each tent, along with their family caregivers. There were also 47 unaccompanied minors who had lost their parents in the destructive force of 7.0 magnitude earthquake.

Despite the tragedy, Dr. Ott explains the future-oriented Haitians, “I was very taken with their attitude. I didn’t expect that. They were anticipating a better time in the near future.” How does she summarize her nursing experience in Haiti? “It was amazing work,” explains Dr. Ott, “We were dirty and tired but felt we were doing something important.” 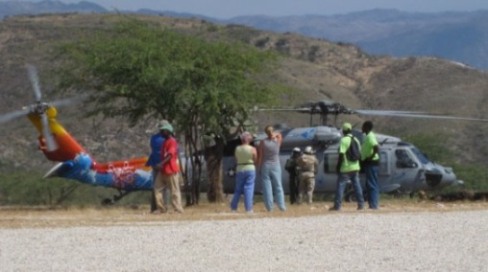 An American military helicopter brings another patient from the USNS Comfort to the Operation Smile team.

Dr. Barbara Ott cares for a young woman who has just had surgery on her leg for an orthopedic trauma. Beds were low cots and floors were dry dirt in the post-operative care tent, making for a dusty and physically challenging care environment.

Dr. Ott, 4th from left in Villanova shirt, with other representatives of Operation Smile.