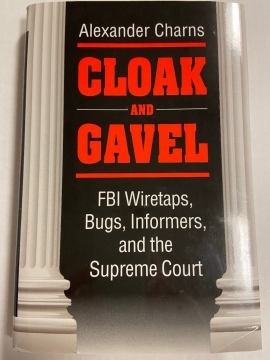 This collection contains thousands of FBI documents procured by North Carolina lawyer Alexander Charns through the Freedom of Information Act over eight years.  His research reveals the extent of FBI Director J. Edgar Hoover’s secret activity to influence Supreme Court decisions and to discredit non-compliant Supreme Court Justices through wiretaps and disinformation.  In the process Charns filed hundreds of Freedom of Information requests and brought lawsuits against the FBI.  Charns was given special permission to research Justice Abe Fortas’ papers which showed Fortas had been an informer to the FBI and the White House during his tenure which ended in disgrace after an ethics scandal.  Charns' pioneering work was the first to expose this FBI constitutional violation of the separation of powers.

The collection has three linear feet of documents provided by the FBI and from Charns' own correspondence and legal actions to obtain them.  It includes files on Warren Burger, Thurgood Marshall, Lewis Powell, Harry Blackman, Byron White, William Rehnquist and Carolyn Agger, the widow of Justice Fortas.  The documents in this collection were obtained by Mr. Charns after the publication of  Cloak and Gavel : FBI wiretaps, bugs, informers and the Supreme Court (University of Illinois Press) in 1992. The collection provides opportunities to expand upon the findings of Mr. Charns’ book.

Special thanks to Professor Tuan Samahon for his role in bringing these unique and important materials to the Villanova Law Library. 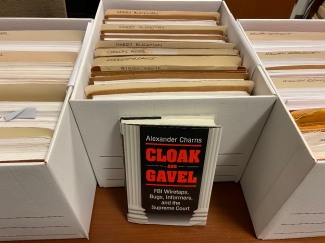 Included in the Alexander Charns Cloak and Gavel Collection are FBI records gathered for the research of Cloak and Gavel as well as other works by Alexander Charns. These include an essay called "Playing the Information Game: How it Took Thirteen Years and Two Lawsuits to Get J. Edgar Hoover's Secrete Supreme Court Sex Files", co-written with Paul M. Green. The essay can be found in A Culture of Secrecy: The Government vs. the People's Right to Know edited by Athan Tehoharis. The included records were also used in an Op-Ed by the author in the Washington Post titled "My Hero Still [Thurgood Marshall] (Dec. 16, 1996). Various other newspaper articles concerning the new information regarding supreme court justices contained within these records were published as they were released.

The Alexander Charns Cloak and Gavel Collection is stored in the secured archives of the Villanova Law Library.  Materials are available for research by appointment in the library facility and under the guidance of library staff.  Requests to examine materials in this collection should be directed to Steve Elkins, Associate Director for Collection Management, at elkins@law.villanova.edu. 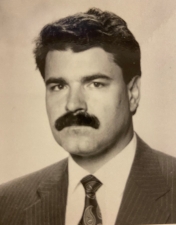 Alexander Charns is a North Carolina Lawyer who specializes in criminal defense and police misconduct. He has been an active attorney since the early 1980's, and during his nearly forty years in practice he has fought for the civil rights of his clients and worked to better his community.

He has written several books and has been published on many occasions in the New York Times, Washington Post, and San Francisco Examiner.

Alexander Charns & Paul M. Green,  "How it took Thirteen Years and Two Lawsuits to get J. Edgar Hoover's Secret Supreme Court Sex Files" in A Culture of Secrecy: The Government vs. the People's Right to Know. Alan Theoharis, Ed. (1998).