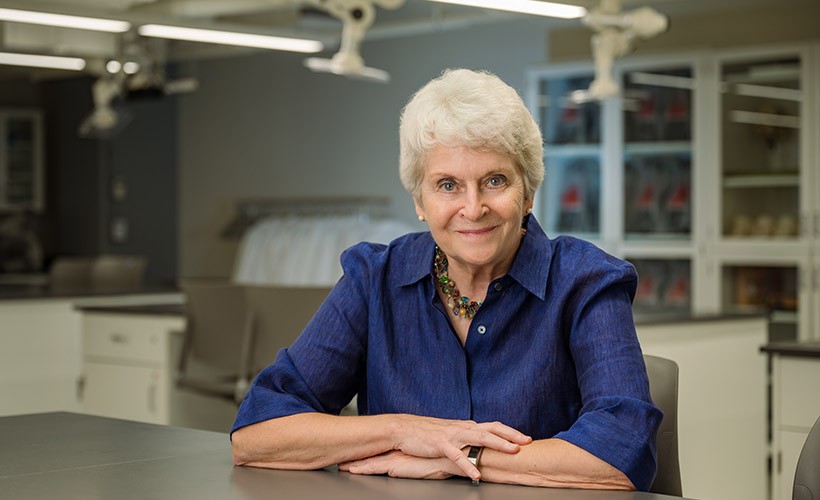 Adele Lindenmeyr, PhD, is the inaugural William and Julia Moulden Dean of the College of Liberal Arts and Sciences. Dean Lindenmeyr began her tenure at Villanova in 1987, when she joined the faculty of the History Department. After serving as the chair of the department, and then as the Dean of Graduate Arts and Sciences, she was appointed Dean of the College in 2014.

The College has flourished under Dean Lindenmeyr’s leadership. She has overseen the launch of numerous new academic programs, including a new doctoral program in Theology and a master’s program in Environmental Science. She has also initiated the creation of four new Centers of Excellence—the Center for Irish Studies, the Albert Lepage Center for History in the Public Interest, the Center for Biodiversity and Ecosystem Stewardship and the Center for Political Theology—bringing the total number of College Centers to 10.

During Dean Lindenmeyr’s tenure, research and scholarship has flourished, supported by several new initiatives she introduced to support the faculty. Dean Lindenmeyr has also directed the College’s strategic initiatives to advance diversity and sustainability. In 2017, Dean Lindenmeyr was the first of the College deans to appoint an Associate Dean of Diversity, Equity and Inclusion, and in 2020, she launched the College’s anti-racism initiative, focused on strengthening support for Black faculty and students. Over the course of her tenure, Dean Lindenmeyr has hired more than 150 new full-time faculty, concentrating specifically on recruiting and retaining faculty from underrepresented groups and encouraging departments to become active participants in those recruitment efforts. She launched the CLAS Course Initiative Summer Grants in Diversity and Sustainability, encouraging faculty to develop new or modify existing courses on race, gender, diversity and sustainability in the humanities, social sciences and sciences.

An internationally recognized expert in modern Russian history, Dean Lindenmeyr is the author or co-editor of several books, including Poverty Is Not A Vice: Charity, Society, and the State in Imperial Russia (Princeton University Press, 1996), the winner of the Heldt Prize for Best Book Published by a Woman in Slavic Studies from the Association for Women in Slavic Studies. Her latest book, Citizen Countess: Sofia Panina and the Fate of Revolutionary Russia (University of Wisconsin Press, 2019), the first biography of one of the most prominent women of late imperial Russia, earned a National Endowment for the Humanities Fellowships Open Book Award in 2020. Dean Lindenmeyr is also the co-editor of three volumes in the series Russia’s Great War and Revolution, 1914-1921 (Slavica Publishers, 2014-present) devoted to publishing new research on Russian history during World War I and the 1917 Revolution. A magna cum laude graduate of the University of Pennsylvania with a bachelor’s degree in Russian language and literature, Dean Lindenmeyr earned her doctorate in History at Princeton University. She currently serves on the Board of Directors of Philabundance, a nonprofit Philadelphia-based hunger relief organization.

An internationally-recognized expert in modern Russian history, Dean Lindenmeyr continues to be active as a scholar.