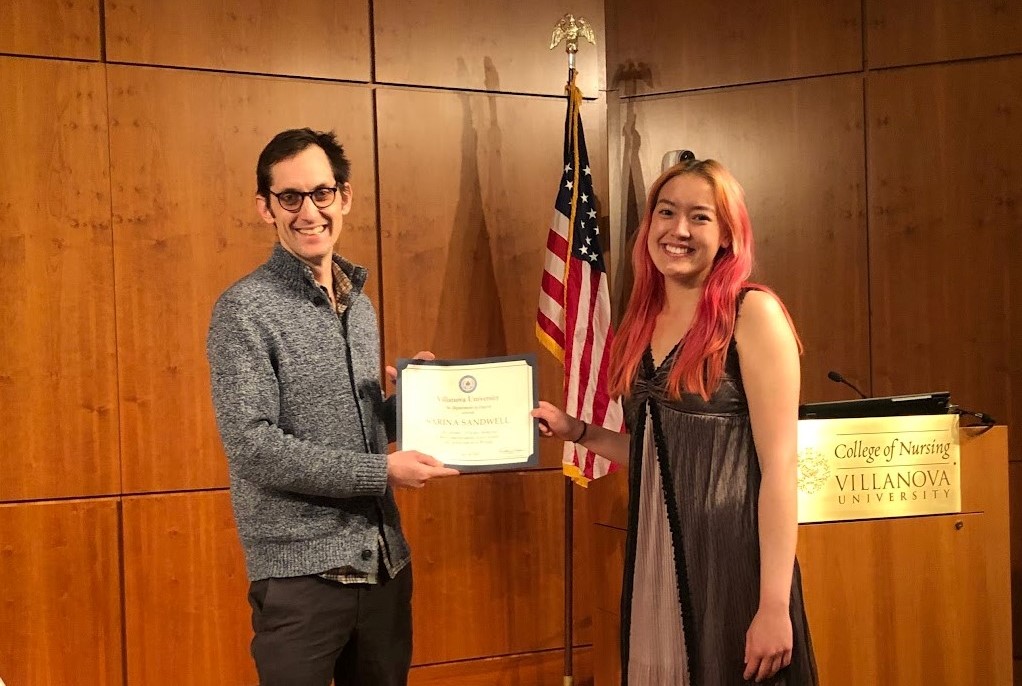 Each year the English department recognizes graduate and undergraduate students for their distinguished poetry, fiction and academic essays.

Congratulations to our 2022 award winners!

Madeline Davids ’22 MA received the Margaret Powell Esmonde Memorial Award, recognizing the best graduate essay, for her paper, “Legibility and Its Limits: Reading the Traumatic in The Prioress’s Tale.”

Ryan Haggerty ’22 CLAS and Sarina Sandwell '23 CLAS (above) won the Jerome J. Fischer Memorial Award, recognizing the best undergraduate essay, for their papers, "And, Seen: The Panopticon and Archiving in Invisible Man," and "Devout Defiant Woman: A Reframing of Hope Leslie, Or, Early Times in the Massachusetts."

You can check out additional coverage of our most-recent awards ceremony on our blog.

Instructions for how to apply for department awards can be found here.

The Medallion of Excellence

The Edward McGrath Medallion, the English Department’s Medallion of Excellence, goes to the graduating senior whom the department selects for outstanding overall performance in the major.

The Fischer Award for for an undergraduate essay

The Jerome J. Fischer Memorial Award is given annually to the most distinguished undergraduate essay written in a Villanova English course. The Fischer Award honors Jerome J. Fischer, who taught nineteenth-century British literature courses, as well as a variety of other courses, at Villanova from 1947 until his retirement in 1983. He died in 1984.

2022 Winners: Ryan Haggerty is a senior English major from Pittsburgh with a double minor in Business and Communication. Ryan will attend Law School in 2023, after taking a gap year. During his time at Villanova, Ryan has hosted a radio-show, participated in Food Recovery, played Club Volleyball, adopted a kitten on a whim, and helped facilitate a reading group at a prison. He dedicates this award to all the incarcerated men at Chester County Prison, without whose stories this essay would not exist.

Sarina Sandwell is a junior English major with minors in Peace & Justice and Chinese from North Haven, Connecticut. She works as a Wardrobe Manager in Villanova Theatre's costume shop. She has a passion for modern and historical fashion, as well as for sewing, which she enjoys integrating into her writing. Sarina currently serves as a Journalism and Correspondence Intern at the Pennsylvania Prison Society. After graduation, Sarina plans to continue studying literature in the hopes of pursuing a career in teaching.

The Esmonde Award for a graduate essay

2022 Winner: Madie Davids is a second-year English MA student at Villanova University. She presented her first paper, “Translation, Trauma, and the Boundaries of Identity within the German Language” at Carnegie Mellon University’s 2021 Bridges and Borders Conference. She is currently writing her MA thesis on the intersections of the Holocaust and horror literature. The essay, "Legibility and Its Limits: Reading the Traumatic in The Prioress's Tale" was written for Dr. Brooke Hunter’s course on Geoffrey Chaucer’s The Canterbury Tales. This course introduced her to new and interesting ways to approach the Tales, and this paper is absolutely indebted to the creativity and excitement of the class and its readings. Madie would like to thank Dr. Hunter for the incredibly useful feedback on the paper itself, as well as for the class from which it sprung.

The George D. Murphy Award in Creative Writing honors a longtime faculty member in the English department. The winner is chosen each year by a panel of Villanova faculty and a Philadelphia-area writer.

2022 Winner: Qiao Kang is a graduating senior at Villanova University where she majors in Communication and minors in business. She is an international student from Inner Mongolia, China, and strives to incorporate her cultural background into her writing. Her interest in poetry writing began this semester in the Creative Writing class she takes with Professor Catherine Staples.

I turned and walked away,

my back to my mother.

They said it’s what a woman has to go through,

it’s what makes a woman full. I sat and waited,

to see what would make my mother full –

my future thoughts would self-improve.

A gift, a bliss, a newborn! That’s what makes a woman full.

I turned and walked away from the delivery room,

my back to my mother. Fear took my breath.

In a room carved by blood, etched with pain,

in a room run and owned by women,

in a room so intricate, interlaced with life and death,

in a room that they say, one day I will step into.

They said, one day I would step into the same room,

one day I would understand when I was in their shoes.

your pleasures in the happiness of your family.

stigma of a woman ignored our cues.

They pushed me back and shut my tunnel vision

of womanhood. A woman’s role is written on a script,

they said, a woman’s life passes through stages,

Miss, mom, nana. It’s what a woman has to go through,

it’s what makes a woman full.

I turned and walked away, my back to my mother.

I know they don’t follow. Among the unfettered, I wander.

The George D. Murphy Award in Creative Writing honors a longtime faculty member in the English department. George D. Murphy, PhD, received his BA in 1949 and MA in 1951 in English from the University of Notre Dame and his PhD in American Civilization from the University of Pennsylvania in 1964. He joined Villanova’s English Department in 1954 and retired in 2000 after 46 years of service. His scholarly publications focused on American writers of the 20th Century. While at Villanova, he was known for his exquisite sense of humor and a singular gift for recalling and recounting a host of humorous tales. While an undergraduate at Notre Dame, he was on the editorial board of its literary magazine—The Juggler of Notre Dame—and contributed a number of poems, short stories and critical essays. He returned to creative writing at the end of his life as a way of coping with grief over his wife’s death and produced many first-rate poems.

The winner of the English and Honors Award in Creative Writing is chosen each year by a panel of Villanova faculty.

2022 Winner: Lily Renga is a freshman in VSB with minors in communications and creative writing. She loves reading, eating, and meeting new people. When she doesn't feel like the Villanova dining hall will satisfy her cravings, she wanders off to Pho Street on Lancaster to get beef pho and spring rolls. She hopes to combine her love for food with marketing in the future by working on advertising CPGs.

Excerpt from "AirPods vs. the Apocalypse"

I knew I had to make an effort to revive him. I was a lifeguard over the summer, and I had to get CPR certified. In a last ditch effort, I closed my eyes and opened them again just in case this whole nightmare was truly a dream. Nope. It’s not like I could even blame the bystander effect either, because the only one around to save him was me. Bracing myself, I placed my palms on top of each other and centered them over his small body frame. What was that song that they made you do CPR to that helped with the beat of your pulses? After rattling my brain for a minute I remembered: “Stayin’ Alive” by Bee Gees. I tried to picture the beat in my head, but it’s just not the same as listening to music. If there is a time I could have used AirPods, it would be right now. My rhythm was off and I couldn’t do anything about it. As I pushed down, I could tell I was doing nothing but hurting him. The beauty of listening to music is that you don’t need to be musically gifted to enjoy it. I fell into the musically gifted-less category. Voice cracking, I tried to let it carry me through the lyrics of “Stayin’ Alive” to no avail. Seriously, imagine a chainsaw cutting into a beehive, followed by the screams of the person who cut down the beehive getting stung. I think most people would prefer this scenario over my singing. I was cut from the school play in first grade after auditioning with a rendition of “Happy Birthday”.

In the end, I couldn’t bring the boy back. I had been performing CPR for thirty minutes, and I was past the window to save him by now. As I lay next to his limp body, out of breath from singing, I truly had never felt more alone. There was absolutely nothing left I could do to save anyone except for myself. I put my head on the cold red tile of Jazz High and lay still. Getting the antivirus, if it was even in the locked cabinet, was pointless. I slumped my hands in my pockets and closed my eyes. That’s when my left hand felt a smooth, small object. Pulling it out, I felt the beautifully slim shape of the case fit right into the palm of my hand. My AirPods. They had been in my pocket the whole time, screaming out to me. I had failed to check the simplest place. Laughter bubbled out of me, first in murmurous waves, then building into an overflowing tsunami. Tears streamed down my face. I put the pristine, sleek pair into my left and right ear and pressed play. The song choice was perfect.

The English Honor Society is composed of senior English majors with high GPAs both overall and in English courses. Members are selected in the spring of their senior year. (They do not have to apply.)

For the summer and spring semesters of 2022, the following students made the Core Honor Roll:

The Core Literature and Writing Seminar Essay Award has been given to the best papers written for English 1975.

The Literary Experience Essay Award has been given to the best papers written for English 1050.