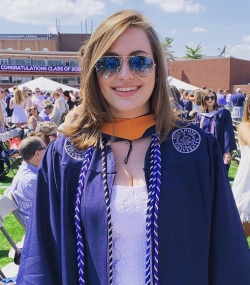 In this interview, senior Kendall Connolly reflects on her leadership in advancing nursing through service in a pre-professional organization.

She served as president, Undergraduate Nursing Senate, from 2017-2019.

How did you rise to this leadership position?     I served as a freshman representative for UNS during the 2015-2016 academic year. As a junior, I was elected Vice President as I was one of two individuals running for office at the time that had previously been in UNS. Due to a sudden vacancy in the President position, I ended up serving as President and was re-elected this year.

Who influenced you?     Villanova University itself influenced my desire to be a leader on campus. I was a student leader in high school and was eager to be involved as freshman here. I find that it’s difficult for first year students to get involved right away, but I was determined to find a place for me within nursing primarily, thus I pursued leadership opportunities in nursing. Dr. Dowdell, my faculty advisor, has also been a huge inspiration to me in always encouraging us to get out there and represent nursing. Her constant support and guidance throughout my four years has aided my leadership efforts and increased my desire to be involved.

Why is it important to you? Why are you enthusiastic about your work in this role?    When I became President of the UNS, the organization was transitioning from a club similar to the other ones to Dean Fitzpatrick’s original vision, a student government specifically for the College of Nursing. This aligned with my personal interests of creating programs for student nurses and advocating for their wants. The Senate does this through listening to our peers, identifying things they want to see change in Driscoll Hall, and working to make them possible. These actions are unique to UNS, making them important to the College of Nursing. I became particularly enthusiastic about the work when we began to see results such as putting in the first hydration station in the building and hosting a Study Hall Pop Up on reading day.

What are the issues you deal with and what’s the biggest challenge in your area?     The biggest issue we encounter in making student’s wishes a reality is the constraints within the College of Nursing. There are some things we want to do but because the College has their policies and commitments we are unable to do so. For example, a lot of students request paper towels and a trash can in the bathrooms. We are unable to accomplish this exact need so instead we installed a second hand dryer in the bathrooms and got trash cans put in. Although we have challenges, our faculty advisors, Professor Scheve and Dr. Fink, do a lot of leg work to make our goals a reality.

How are you effective in your role? What’s critical to your success in the role?     I believe I am effective in my role because I have an amazing team. UNS is not a one man job, it is a collection of Nursing students from every grade and program working to make Driscoll Hall better. All of the class representatives listen to their peers and ask questions in order to report to the group what we should be working on. VP Lily Dufour, Secretary Rachel Zlotnick, and Treasurer Patrick Tracey are incredibly passionate individuals who work extremely hard to initiate fundraisers, establish our yearly budget, and send out a monthly newsletter. Again, Dr. Fink and Professor Scheve do some much leg work. They take lists of possible programs and changes and work out all the details for us. Overall, every member of UNS is necessary for us to be effective, and this team is critical to my success as a leader.

How does innovation fit into your role as leader?     Innovation is a large part of UNS and my leadership. I devised the idea for the Study Hall Pop Up because I noticed nurses shying away from strutting there on the Reading Day. I tried to think of a way that we could empower nurses to utilize their space and the idea for a pop up was born. Overall, by offering snacks and reserving classrooms, we are trying to create a space conducive to studying for nursing exams.

What’s your hope for our profession?      My hope for nursing is that nurses and nursing students will stop saying “I’m just a nurse.” I think this has a lot to do with how society treats nurses and the perceived hierarchy of care in a hospital. However, student nurses need to be inspired in their four years, they need to understand they are entering an incredible field practicing the science of patient care. We are the #1 trusted profession. In addition to inspiring nurses to be proud of their careers, nurses need to be taught that they can create their own rules. We have nurses in law, business, engineering— we are everywhere! This is because caring for people does not have boundaries, and there is no one better to provide this care then nurses.