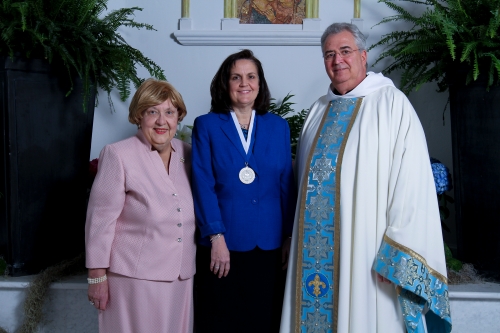 Paula Devlin Agosto received the 2015 Medallion for Distinguished Leadership in Administration of Nursing and Health Care Services. The following is her citation.

After her 1985 graduation from Villanova University’s College of Nursing, Paula Devlin Agosto began working at The Children’s Hospital of Philadelphia, launching her career as a staff nurse in the Pediatric Intensive Care Unit, where she was described as “a bright, talented, and articulate nursing professional.” Over time Paula rose through the CHOP organization, and currently serves as Senior Vice President and Chief Nursing Officer since 2013.

Paula demonstrated nursing leadership skills early in her career, and within five years of her entry into practice, was promoted to assistant manager of the Pediatric ICU. She soon advanced to become nurse manager of the unit and later Director of Critical Care, Transport, and Emergency Department Nursing, and then Assistant Vice President for Critical Care Nursing. Along the way, she added a master’s degree in Health Administration to her portfolio.

As Paula’s career at CHOP evolved, she remained an advocate for nurses, patients, and families, and is fully committed to ensuring excellent patient care. She has been highly successful integrating the voice of the family in care decisions, which has translated into family-centered care and partnership with care teams across all intensive care settings.  Paula has championed patient flow improvements, and led initiatives resulting in a 40% improvement of key clinical quality and safety indicators; Paula has since successfully spread the methodology to all other inpatient units. Under her leadership, CHOP successfully earned Magnet status for the third time. This prestigious designation by the American Nurses Credentialing Center recognizes facilities for high quality patient care, excellence in nursing, and advancement in professional nursing practice.

As demanding as Paula’s roles have become over the years, she remains a very present leader, often doing patient rounds several times a week and seamlessly moving from board room to bedside. Paula is a no-nonsense nurse leader who promotes accountability within herself and others. She continues to be a strong, positive influence on the growth and development of the CHOP organization. A trusted colleague of physicians and nurse leaders, Paula nurtures talent while motivating staff to perform with a high level of excellence.

For her exemplary leadership in providing high quality pediatric care with a continuous expression of Villanova’s mission and values within her work, it is with great pleasure the College of Nursing awards its 2015 Medallion for Distinguished Leadership in Administration of Nursing and Health Care Services to Paula Devlin Agosto.