Advancing towards her goals 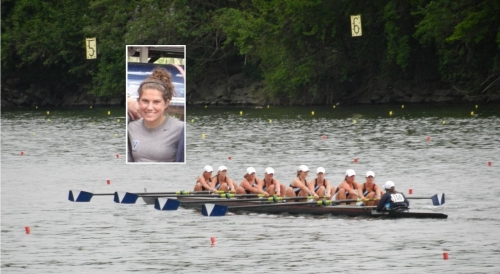 Whether as a rower or a nursing student, junior Tori Clay pursues her passions.

It was late December in 2009 when Tori Clay, a senior at Triton Regional High School in Byfield, Mass. at the time, heard about Villanova University. Everything she read about the school and its nursing program that was now supported by a brand-new facility, sounded like the perfect fit. Though the application deadline for the University was less than two weeks away, she quickly gathered her materials and sent in her application.

After her first visit, Tori was “blown away by how friendly everyone was and how community-based the school felt.” As she walked around the campus, she “fell in love with the school size, the proximity to Philadelphia, and the energy on campus.”  With academics and athletics playing an important role in her life, Tori felt Villanova was the perfect fit; so when she finally received her acceptance letter, she wasted no time in making arrangements to begin her life as a Wildcat. She is now a junior nursing student.

Whether kayaking on the Merrimack or a rowing on the Schuylkill, Tori finds peace outside and on the water. She began her freshman year as a rower, with her boat taking second place at the Knecht Cup in Camden, N.J. and third place at the Dad Vail Regatta in Philadelphia (she rows bow -on the far left - in the photo above)—the team’s two most prestigious races of the season. As a sophomore, she led the team as a coxswain, again taking second place at the Knecht Cup.

Entering her junior year, Tori chose to leave the sport so that she could focus more on her studies and future career as a nurse. Though Tori had long been interested in kayaking and crew, she also grew up with a passion for healthcare. Influenced but never pushed by her mother Paula, a nurse working mainly in critical care for nearly 35 years, she found throughout high school she was deeply interested in math, science and how the body works.

“Going into the medical field just seemed to scream out at me. The fact that I could be using my love for science to help change people’s lives really inspired me to become a nurse,” notes Tori.

In the fall of her sophomore year, Tori began working in the Learning Resource Center of the College of Nursing. As a junior, she joined the Undergraduate Nursing Senate and became Publicity Chair and also was inducted into the honors fraternity Phi Sigma Pi. Though she is not competing on the water this year, she found a way to continue her active lifestyle as a member of Club Running and hopes to compete in races this spring.

With her final year at Villanova approaching, Tori has already given thought to which path she wants to pursue as a nurse. After some experience in medical-surgical nursing, she would like to work in the emergency department or operating room.  It is in these environments that she feels her nursing skills could be put to the test. With her love of math, and also a long-time interest in engineering, Tori sees her next step after years of nursing is working towards a degree in biomedical engineering.