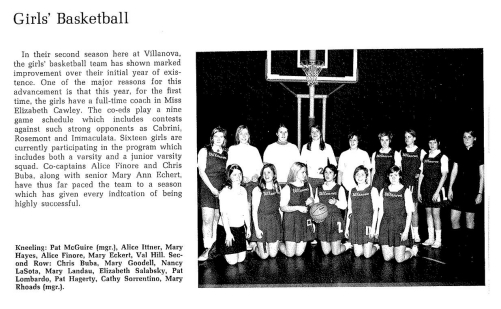 Women's basketball was captured on the pages of the Belle Air yearbook.

From its early days of applying adhesive tape numbers and hunting for a court, women’s basketball at Villanova has grown to a nationally recognized program. Its roots can be traced to a young nursing student with a love of the game.

“It was never an ‘equal rights’ reason to play. I simply loved the game,” emphasizes Alice Finore Brogan ’70 BSN, MSN, RN. This longtime adjunct faculty member in the College of Nursing, who specializes in psychiatric-mental health nursing, organized what would become the first team, thereby launching women’s basketball at Villanova.

Brogan had skill and passion behind her. She had played CYO, intramural and high school basketball. College was not to be the end of her career. Brogan remembers holding firm when space became an issue, “Back in 1967, my sophomore year at Villanova University, a small group of women would play basketball in Alumni Hall.  The boys would try to bump us out but I had reserved the gym-and later the Field House- to practice and play our games.”

Brogan asked retired Army nurse and pediatric nursing instructor Evelyn Behanna to be the coach and moderator of the new squad.  “She agreed and so began the early makings of the Villanova women’s basketball team,” Brogan recalls.

Unsure of what kind of response she would get, Brogan placed tryout signs in strategic locations throughout the campus. “I talked to my colleagues, underclasswomen, nursing students, sorority members, and the Belle Air staff about trying out for the team. To my surprise, forty-eight women tried out and I was thrilled,” she notes. Among those she encouraged to try out was classmate Mary Ann Eckert ’70 BSN, who made the team.

Despite formation of a team, a court was never a guarantee. Brogan offers, “On several occasions, our team would get kicked out of the field house despite the fact that we had reserved the court.  It was hard to secure the court space especially prior to a men’s game as visiting teams would come in the night before for practice time.”

Undeterred, Brogan says she, along with Marie Maguire and Rosie Greyson, went to Eastern College (now University) after their 1968-69 season and added Villanova to the women’s league.

Basketball kept this already-busy student even busier. “As a nursing student in clinical two days a week at Philadelphia hospitals, I had only three days outside of long labs and classes to see Father Robert Wesson, the head of extracurricular activities. Starting a new team meant things like ordering uniforms and hiring a coach,” recalls Brogan. When the new uniforms arrived, she had to use adhesive tape to create numbers on each pleated tunic.

The team’s new coach was Elizabeth Cawley, a former player at Cabrini College. Reflecting on the season, Brogan says, “We played Immaculata University – ‘The Mighty Macs- who were national champs, Rosemont College and Gwynedd-Mercy College who had the infamous Mary Ellen Barnett on their team.  She had a jump shot some boys wished they had!  We lost to Gwynedd-Mercy College by 32 points that year.”

Brogan co-captained the team in 1969-1970 and organized all league games, regulations, practices and tryouts. “That year we were recognized on campus and pictured in the Belle-Air yearbook.  They were fun, exciting and great years… a new beginning,” she notes.

Over the years, Brogan had played in many alumnae games –family events, she calls them- and looks forward to watching this season’s match as well as the current team’s games. “It is exciting to see the program’s growth over the years,” she offers.

Describing her interests, Brogan says “I truly enjoy people and working toward a team goal.” What did she learn from the basketball start-up experience? She states, “Don't be afraid to start something new.”

Thanks to Alice Finore Brogan ’70 BSN, MSN, RN who gave permission to adapt her written thoughts and memories that she shared with the Women's Basketball office on the beginnings of the sport.