Footsteps to the future 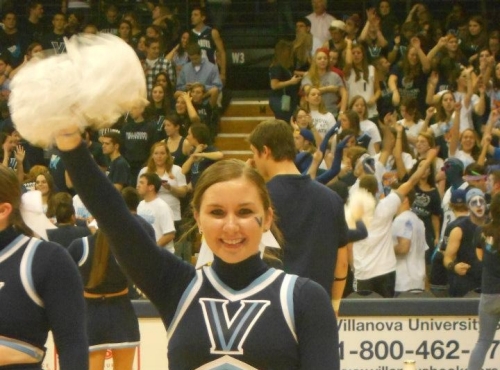 Junior nursing student Kaleigh Garvin contributes to Villanova in many ways, including cheering for the athletic teams and representing the University at national competitions. She is developing her professional interests through SNAP and Nursing Without Borders where she volunteers to care for those who lack healthcare.

Little did Kaleigh Garvin know that when she travelled with her family to visit her aunt Kristen Goulet Durand’s ('85 BSN) alma mater in Pennsylvania, she would find the place she’d soon call her home away from home. Aunt Kristen took Kaleigh on a tour of the campus to share her experiences at the university. Kaleigh immediately felt the sense of community and friendly atmosphere. Driscoll Hall, recently built, was new for both visitors and so they toured the nursing building together. Kaleigh was so impressed, especially with the advanced nursing labs, that she decided then and there she would follow in her aunt’s footsteps.  Her mother Kathleen, a nurse, is master’s-prepared and also a strong professional role model for her daughter. 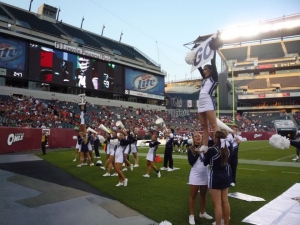 Kaleigh Garvin, far right, holds the "go" sign while fellow cheerleaders hold her at the Villanova-Temple game this fall at Lincoln Financial Field, home of the Philadelphia Eagles.

Having left her home of Walpole, Mass., just 13 miles south of Boston, this junior student has established herself as part of the Villanova community. Since freshman year, Kaleigh’s been involved in several activities and organizations including the all-girls cheerleading squad, the Student Athlete Activities Committee (SAAC) and the Villanova chapter of the Student Nurses’ Association of Pennsylvania (SNAP). Kaleigh cheers at football and basketball games. She has been on the nationals team each year which is a competition team made up of members from the coed and all-girls teams who have been selected to compete. Each January, they travel to Disneyworld to compete in the UCA College Cheerleading National Competition.

As a member of SAAC, she informs her cheerleading squad of the different events for athletes and gauges interest in participation. For example, the athletes for athletes program gains support for other teams by having some members of other sports attend games, guaranteeing a crowd for that sport (the track team cheering on the soccer team, for instance). Through this program, the cheerleading team participates in the opening ceremonies at the Special Olympics Fall Festival held at Villanova each November.

With her busy schedule, Kaleigh also finds time to participate in the nursing community through memberships with SNAP and one of Villanova’s newest groups, Nurses Without Borders (NWB), that focuses on addressing social injustices in healthcare. For the past two years, Kaleigh has worked in the nursing labs in Driscoll Hall, helping to set up simulations and also giving tours of the facility.

With an aunt and a mother who are nurses, Kaleigh had been exposed to nursing most of her life. She had always been interested in healthcare, volunteering in the pathology department of a local hospital in Massachusetts which furthered her interest in the health sciences. Ultimately, Kaleigh felt (and reaffirms today) that nursing was the best fit. Once she earns her degree, she hopes to work in labor and delivery (her aunt’s primary nursing focus), neonatal intensive care, or in the operating room. Kaleigh plans to continue her education with a master’s in nursing after working for several years following graduation, once again following in her family’s footsteps.