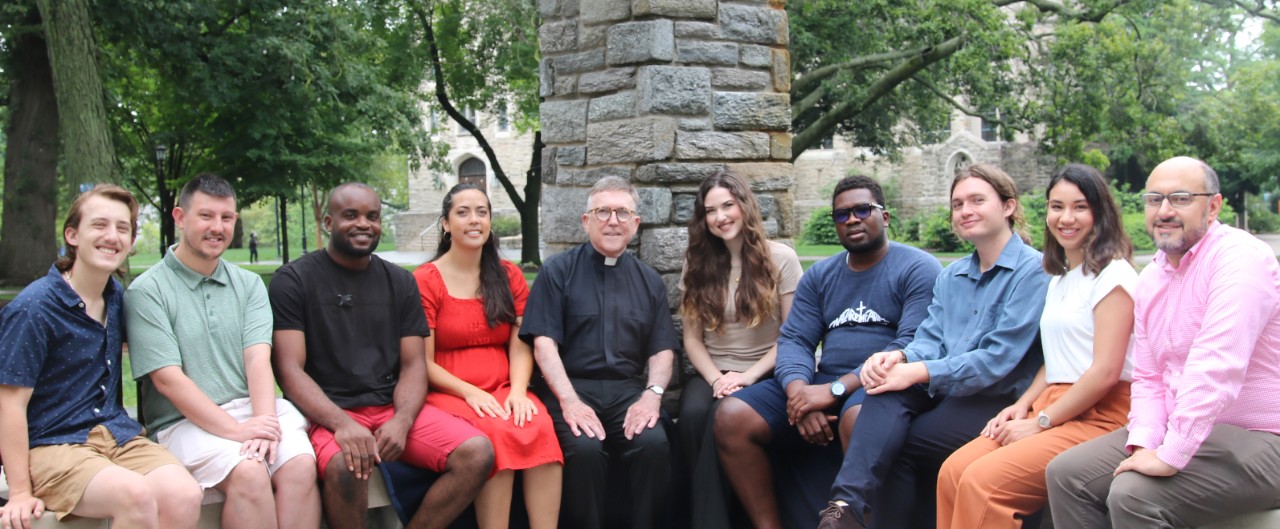 The Center for Residential Ministry (CRM) within Campus Ministry works with Residence Life to foster community and create opportunities for personal and spiritual growth within the residence halls.

Just as Augustine celebrated friendship as a place to encounter God, our Graduate Resident Ministers (GRMs) and Peer Ministers help to create an atmosphere that supports students in building friendships with their peers and growing in their relationships with God.

GRMs live and work in first-year halls, and Peer Ministers in upperclass halls.

Graduate Resident Ministry is a halftime, residential ministry position that fulfills the supervised ministry practicum requirements of the MA in Ministry and Theology or the Certificate in Pastoral Ministry within the Department of Theology and Religious Studies.

If admitted into the master’s program in Theology, GRMs must enroll in the MA in Ministry and Theology degree program and maintain good academic standing

If admitted into a graduate program in another department, must enroll in the Certificate in Pastoral Ministry within the Theology Department

Live in a first-year residence hall

Participate in Campus Ministry staff meetings, practicum and program supervision, and supervision with the Counseling Center

Work with residence hall staff to foster community within the residence halls, possibly by creating and facilitating a weekly sharing group (Get Real)

With the help of the program director, seek out a ministerial placement within the Office for Mission & Ministry to develop further your ministerial skills and discern your vocational path

Eligible candidates for the Graduate Resident Ministry Program will have the following:

An undergraduate degree (3.0 min GPA) with at least 15 credits in Theology, Philosophy and/or another discipline in the Humanities

Minimum of one year of post undergraduate work/service experience (strongly preferred, but not required)

Admission into a graduate degree program at Villanova; preference is given to applicants to the MA in Ministry and Theology Program; applicants to other graduate programs in the College of Liberal Arts and Sciences will be considered on an individual basis

Active participation in a faith tradition and/or spirituality

Note. Our program is best suited to support and prepare for professional ministry graduate students who identify as Catholic. However, students who belong to other Christian churches or faith traditions are most welcome to apply if they believe that our program will advance them on their vocational path. Some flexibility in course requirements in the Theology program can be expected for non-Catholic students. Please reach out with questions or concerns if you wonder whether our program might be right for you.

We provide personal, spiritual and professional support for our GRMs within and outside of Campus Ministry. These forms of support include

Academic advisement with the Graduate Program Director in the Theology Department

Established Campus Ministry partnerships with the Office of Intercultural Affairs; the Africana Studies Program; the Office of Health Promotion; the Center for Access, Success, and Achievement; Learning Support Services; and the Office of Diversity, Equity and Inclusion, among others that connect GRMs with others who share their identities and interests to supplement their involvement on campus

Support for a finding a spiritual director on or off campus

Support for finding a personal counselor on or off campus

Villanova University provides the following to each GRM:

Room for 1 or 2 summer semesters for GRMs who elect to take courses during the summer before Year 1 or between Years 1 and 2. (Taking at least 1 summer course is strongly encouraged to lighten the academic load during the final semesters)

An annual stipend (approximately $12,000) to cover the cost of books and living expenses. The total value of the tuition, room and board, and stipend portions of the Graduate Resident Ministry Program is over $71,000

One hundred percent of our graduates have found employment in ministry or enrollment in further graduate study within 6 months of graduation. Ministers who have graduated from our program are employed in a wide range of positions, including

Campus ministry at a college or university

Coordination or administration within a postgrad volunteer program

Other possible pathways include

Protestant, Ecumenical or Interfaith Chaplain in educational or healthcare institution

The supervised ministry practicum required for both the MA in Ministry and Theology and the Certificate in Pastoral Ministry can be pursued along two tracks:.

The first track consists of the Graduate Resident Ministry Program involving on-campus residential ministry. It is reserved for students offered GRM positions. GRMs also devote some of their 20 hours/week of ministry to a specialized ministry placement each semester.

The second track consists of a supervised ministry field placement, which does not require living on campus. Ministry students who will not be GRMs can receive a nonresidential ministerial placement within Campus Ministry or be given a placement at a ministry site outside of Villanova to fulfill the practicum component.

Supervised practicum placements on campus can include, but are not limited to, the following:

The field placement supervisors in the Center for Residential Ministry (CRM) will help students establish their practicum placements.

If a student is already engaged in professional ministry (whether full-time or part-time), CRM may allow that ministry to serve as the student's practicum placement if a qualified site supervisor can be identified.

CRM will work with the ministry student and ministry site to develop a clear agreement about the student's responsibilities and learning objectives.

Applications for admission into the Graduate Resident Ministry Program in the Fall of 2023 will be accepted starting August 1, 2022. The priority application deadline is February 1, 2023. After February 1, applications will be considered on a rolling basis as space permits.

Applicants begin by completing the Graduate Liberal Arts and Sciences application and selecting either the MA in Ministry and Theology or the Certificate in Pastoral Ministry as their primary or secondary discipline of study.

All application and admission information for the MA in Ministry and Theology (48 credits) and the Certificate in Pastoral Ministry (24 credits) can be found in the Graduate Programs in Theology.

If you are applying to Campus Ministry’s GRM Program as an applicant to a degree program in another department, then you need to follow the application and admissions requirements for that department. You must also select the Certificate in Pastoral Ministry as a "secondary discipline" on the Graduate Liberal Arts and Sciences application.

All applicants to either the MA or Certificate programs in ministry will have a preliminary video interview on a rolling basis. Admission decisions will also be made on a rolling basis. Qualified applicants who have completed their application by the February 1 priority deadline will be invited to have a second, lengthier video interview for consideration for the GRM Program (and other funding opportunities) by the end of February. Offers will be made in early March and continue until all positions are filled.

In honor of the ongoing ministry of Sister Cora Marie Billings, RSM, '67 in and around Philadelphia and across the US, we seek a lay Black Catholic who wants to continue Sister Cora Marie’s vocation of extraordinary service to the Catholic Church and the People of God.

This Graduate Resident Minister should exemplify Sister Cora Marie’s commitment to anti-racism within the Church, as well as her exceptional example of local and national lay leadership.

It is the hope of Sister Cora Marie, a Villanova alumna, that the person who fills this funded position will help advance the University's mission.

"When we as Villanovans live the motto ‘Truth, Unity, Love,’ we embrace and enhance the opportunities to think critically, act compassionately and succeed while serving others," she says. "This also allows us to celebrate the diversity and equity of the Body of Christ."

Note: This position has the same roles, responsibilities, compensation and application process as the other Graduate Resident Ministers described above. To apply for the Sr. Cora Marie Billings position please speak to your interest and qualifications in your Pastoral Ministry Statement.

She was the first Black woman to enter the Sisters of Mercy’s Mid-Atlantic community, joining the religious order in 1956. She went on to hold positions at archdiocesan elementary and high schools, becoming one of the first African American sisters to teach in a Catholic secondary school in Philadelphia.

She also helped to found (as did Servant of God Sister Thea Bowman, FSPA), the National Black Sisters’ Conference in 1968.

After moving to Richmond in 1981, Sister Cora Marie was the first African American sister to work as a campus minister at Virginia State University. She also was the director of the diocese’s Office for Black Catholics for 25 years.

Beginning in 1990, she served as the pastoral coordinator of St. Elizabeth Catholic Church for 14 years—the first Black woman in the country to lead a Catholic parish. For a time, she also supervised the lay leaders of parishes in the Diocese of Richmond. (Because of her work at St. Elizabeth, she was once a correct answer on Jeopardy!.) She served as the deputy director for Virginia’s Human Rights Council from 2007 to 2010.

Sister Cora Marie’s mother, Mrs. Ethel Lee Billings, was active in the Philadelphia chapter of the Federated Colored Catholics in the 1930s. Through that work, Mrs. Billings (then, Miss Lee) advocated for a young West Catholic graduate, James Richardson, who had been denied admission to La Salle University because of his race. Mr. Richardson eventually enrolled at Villanova and graduated in 1941.

Sister Cora Marie’s grandfather, John A. Lee Sr., was a graduate of Roman Catholic High School, where he played basketball. When other high schools in the Catholic League refused to play against Roman if John Lee remained on the team, his teammates agreed that if John Lee couldn’t play, they wouldn’t play—even if it meant forfeiting every game. The Catholic League relented and compelled the schools to play against Roman.

Sister Cora Marie had two aunts who joined the Oblate Sisters of Providence in Baltimore.

Peer Ministers are sophomores, juniors and seniors who provide a ministerial presence in their residence halls and throughout campus, promoting spaces for engagement.

Engage with their own spiritual or religious experience

Each Peer Minister takes part in an area of ministry that suits their gifts and interests.

Agape Latte and Cari-talks: Coordinate these speaker series, which seeks to create honest, comfortable spaces where students can learn and be inspired and challenged.

Ecumenical and Interfaith Programming: Help coordinate and promote opportunities to learn and engage with others across religious traditions and backgrounds. Learn about upcoming events here.

Faith Sharing Communities: Facilitate small groups where members talk about the challenges of student life, including relationships, decision making, faith and spirituality. Discover that we all share similar questions and concerns. Learn more or find a small group.

Music Ministry: Explore and express your faith through making and sharing sacred music. This group meets weekly to practice and provides music at evenings of praise and worship and Residence Hall liturgies.

Residence Hall Liturgy: Coordinate liturgies in residence halls on campus. Work with RAs, Campus Ministers and Augustinian presiders to plan, promote and celebrate these Masses in informal, comfortable spaces. Each Mass is followed by refreshments, conversation, and connection.